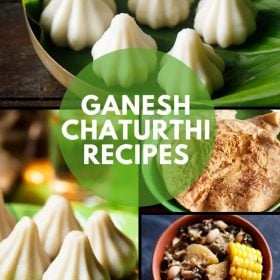 Ganesh Chaturthi or Vinayaka Chaturthi is one festival with which many of my childhood memories are associated with. Having grown up in Mumbai, I have witnessed and been a part of this awesome festival all through my growing up years. 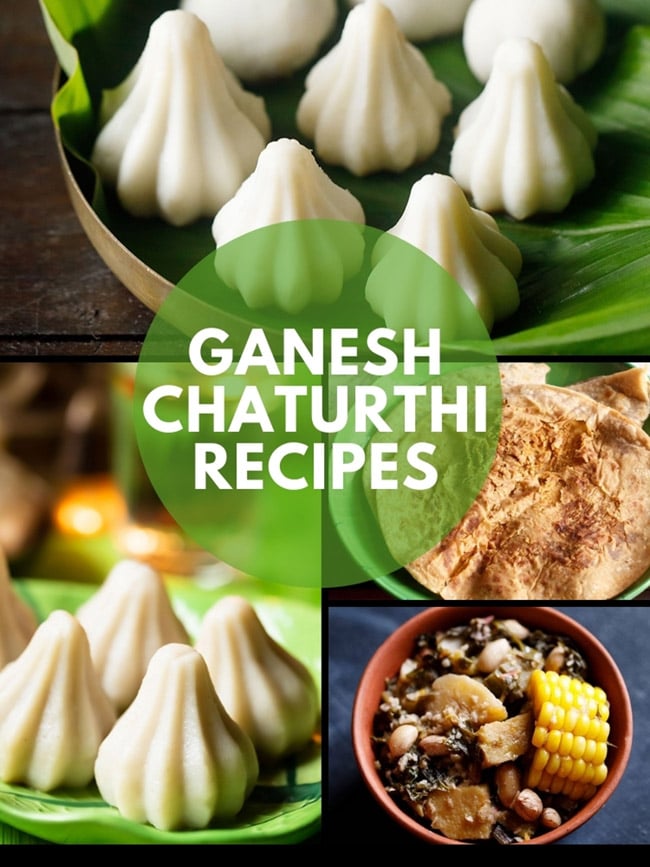 This year Ganesh Chaturthi is starting on 10 September 2021 and as usual will last for 10 days. In this post I have shared a total of 88 recipes which includes 9 Modak varieties and 79 recipes for sweets, snacks and lunch or dinner that can be made for the Vinayaka Chaturthi festival.

So while making any recipe for Vinayaka Chaturthi please do check with your elders about the use of common ingredients like onion, garlic, spices or herbs etc as every community has different rules for fasting or festival recipes.

Many people don’t use onions and garlic while making recipes for the festival. So if any recipe has onions or garlic and you don’t use them then just skip the onions, garlic or any other excluded ingredient.

Most of the recipes mentioned below have vegan options also. If you are vegan then use oil instead of ghee and substitute dairy milk with coconut milk or almond milk.

Ganesh Chaturthi is one of our favorite Indian festivals. Until last year we would visit the various Ganesha pandals in our area. But I don’t think this year it is possible.

Growing up my parents would take us at the various Ganesh pandals in South Mumbai during the 10 day festival.

Every year we would visit my mom’s friends place in Girgaum, Mumbai. From her home, we would see the awesome processions on the last Visarjan day.

We would also have a huge pandal in our locality. We would also take part in the Ganesh aarti both in the morning and in the evening.

I have grown up experiencing the positive vibe and celebration which happens during the Ganesh Chaturthi festival.

Ganesh Chaturthi is celebrated with equal festivity and devotion in many Indian states like Maharashtra, Karnataka, Andhra Pradesh, Goa, Gujarat and so on.

Apart from modak, ladoo is also the most favorite food of Bhagwan Ganesha. I have listed below many recipes from the blog that can be made during the Ganesh festival.

Modak is the most favorite sweet of Bhagwan Ganesha. There are many types of modak prepared during Ganesh Chaturthi. But the most famous Maharashtrian modak is steamed modak or ukadiche modak made from rice flour.

Many sweet shops serve readymade mava modak or peda modak in Maharashtra. In some shops advance orders are also taken for modak.

If you plan to prepare sweets for Bhagwan Ganesha then Modak and Ladoo are two sweets which are must. You can make either Boondi ladoo, Rava ladoo, Besan ladoo or Coconut ladoo. 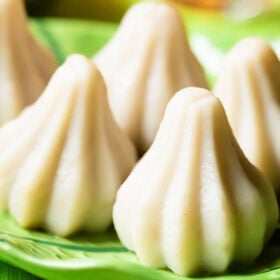 Modak Recipe (With and Without Mould)

Modak or Ukadiche Modak is a traditional Maharashtrian steamed sweet dish offered to Bhagwan Ganesha on the occasion of Ganesh Chaturthi festival.

2. Fried modak – These fried modaks are made with whole wheat flour with sweet coconut and jaggery filling. They can also be made with all-purpose flour (maida). 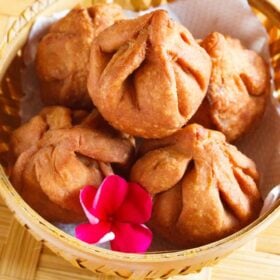 Fried modak is a delicious and popular modak variety made during the Ganesh Chaturthi festival and offered to Bhagwan Ganesha. This recipe has the crust made of whole wheat flour with a sweet stuffing. 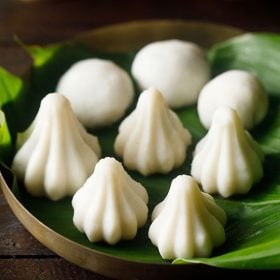 Kozhukattai is a festive South Indian sweet of steamed dumplings made with rice flour dough and stuffed with a filling of coconut and jaggery.

4. Rava modak or semolina modak – This is an easy modak recipe as no frying or steaming of the modak is required. 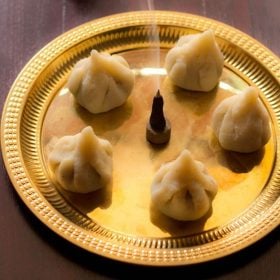 Rava Modak are sweet dumplings made with semolina and stuffed with coconut jaggery filling and flavored with cardamom powder. 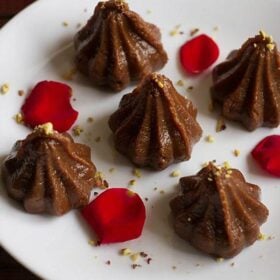 Chocolate modak is an easy variation of modak made with 3 ingredients – chocolate, mawa (evaporated milk solids or khoya) and sugar. This recipe takes less than 30 minutes to make and is simple to make during festive seasons.

6. Dry fruits modak – Sweet dumplings made from rice flour and stuffed with a mixture of mawa, poppy seeds, coconut and dry fruits. 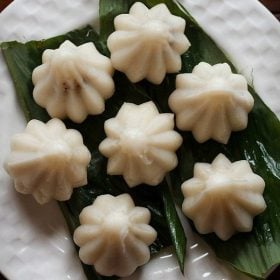 Dry fruits modaks are sweet dumplings made from rice flour and stuffed with mixture of mawa, poppy seeds, coconut and dry fruits. 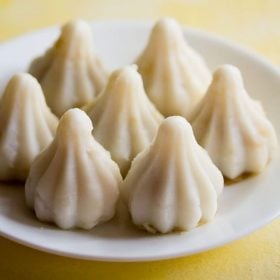 Sweet kozhukattai is a South Indian recipe variation of modak made with a stuffing of chana dal, coconut and jaggery. 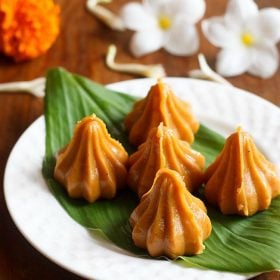 Mawa modak are quick and tasty modak variety made from mawa/khoya, sugar and cardamom powder.

9. Mango modak – This delicious modak has a lovely taste of mangoes and is prepared with fresh mango pulp, khoya (evaporated milk solids), sugar and flavored with cardamom powder. 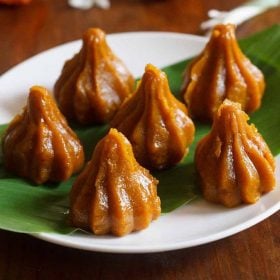 Each family has its own traditional and favorite dish that they prepare. I am sharing Maharashtrian recipes from the blog, that can be made during the ganesha chaturthi festival. On the first day of Ganesh Chaturthi festival, modak is usually made.

No festive occasion is complete without sweets and so is the Ganesh Chaturthi festival. Some sweets from the blog that can be made during the ganesha festival.

Note: for more Halwa varieties you can check this Collection of 31 halwa recipes.

The method to prepare sundal is more or less same with some variations here and there. Sundals are good snack option, you can consider to quickly make for Ganesh Chaturthi.

Wishing you all Happy Ganesh Chaturthi. I pray that Bhagwan Ganesha bestows prosperity, luck, wisdom and blessings to everyone. 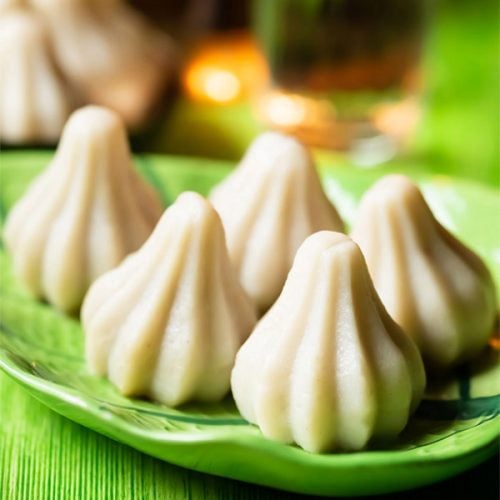 This Ganesh Chaturthi Recipes post from the blog archives first published in September 2013 has been updated on 13 August 2020.