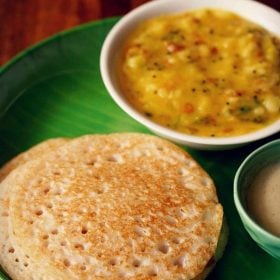 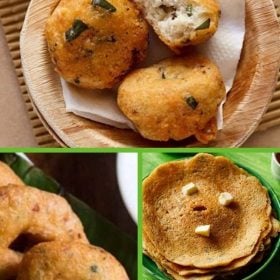 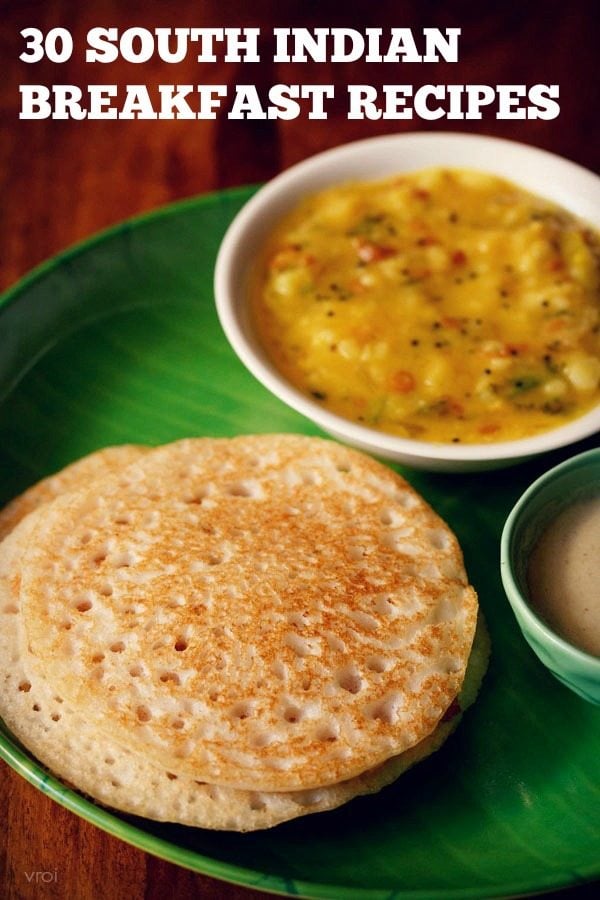 In these states also there are regional cuisines that are known for their unique and delicious recipe, eg Chettinad cuisine, Udupi cuisine, Mangalorean cuisine, Hyderabadi cuisine etc.

In this post, I am sharing a collection of Popular breakfast recipes from South India. I hope this post helps you to decide on your breakfast menu.

Most of the South Indian breakfast recipes are healthy or can be made healthier by replacing all purpose flour with whole wheat flour. Some recipes require some preparation like soaking rice and lentils for idli or dosa. Recipes like idli, dosa, upma, appam can also be packed in a tiffin box for kids.

1. Idli Recipe – Idli is one of the most healthiest and popular South Indian breakfast dish. These are soft, light, fluffy idlis served with Sambar and Coconut Chutney is not only tasty but very healthy as well.

2. Masala Dosa – It is again a popular South Indian breakfast snack not only in India but abroad as well. Though making masala dosa is a long process, but its worth it. In this recipe, the dosa is crisp and served with a delicious potato masala. If you do not have time, then skip making the potato masala and just make the sada dosa (plain dosa) with coconut chutney.

3. Appam Recipe – These tasty lacy soft hoppers also known as appam or palappam are a popular Kerala breakfast served along with Vegetable Stew. They are gluten-free and vegan as well

4. Pongal Recipe – Ben Pongal is a South Indian breakfast made with rice and yellow moong lentils. This porridge like savory dish is laced with cumin, asafoetida and black pepper. Not to forget the lovely aroma of ghee, which is used for tempering these spices. Two more tasty Pongal variations you can make for breakfast are:

5. Medu Vada – These are crispy, fluffy, soft and delicious lentil fritters from South Indian cuisine. If sweet breakfast isn’t your thing, try this recipe for savory spiced donuts made with black gram lentils and aromatic spices. The combo of Vada with Sambar tastes too good.

6. Upma Recipe – It is an easy and quick South Indian breakfast dish made from rava (sooji or cream of wheat). Upma is usually served with coconut chutney, lemon slices or Lemon pickle. It can also be had plain. There are many variations of upma popular in south India like:

7. Idiyappam recipe – idiyappam also known as nool puttu are string hoppers and a popular breakfast in Kerala. this idiyappam recipe gives you soft and smooth idiyappam which tastes very good with a curry or any side dish of your choice like Veg korma or Mushroom korma or veg stew or Kadala curry.

8. Uttapam recipe – Uttapam is a delicious South Indian tiffin breakfast of thick pancakes. These pancakes are made from fermented rice and urad dal batter. Other delicious uttapam variations you can make for breakfast are:

9. Rava dosa –  Another popular South Indian dosa variety that you can make for a quick breakfast. The best part of making instant rava dosa is that it does not require any fermentation and is very easy to make. You can make the rava dosa plain or you can spice it up by adding chopped onions, curry leaves, herbs and spices. Other popular dosa varieties are:

10. Puttu recipe – puttu served with Kadala kari is one of the most popular breakfast combination from Kerala. Apart from kadala curry it also tastes good with veg stew or potato stew.

11. Poori masala recipe – the combo of Poori with potato curry is popular all over India. This South Indian potato masala gravy taste awesome not only with pooris but also goes very well with dosa or Roti or Paratha. At times I also make this Maharashtrian style poori bhaji and Punjabi aloo poori. This breakfast dish is liked all over India and is made in different ways.

12. Akki roti – it is one of the staple breakfast in Karnataka and is made with rice flour and mix veggies. Akki rotti makes for a good healthy breakfast. You can add veggies of your choice in the dough. Another flat bread which is popular in Karnataka cuisine is Jowar roti.

13. Pesarattu recipe – Begin your day with these healthy crepes made from green mung beans. Known as Pesarattu these are crisp crepes made with a lightly spiced mung bean batter and are a speciality breakfast from the Andhra cuisine.

14. Adai recipe – adai is a delicious protein rich pancake. Making adai is very easy. rice and lentils are soaked and then ground to a slightly coarse batter. Also unlike Making dosa you don’t need to ferment the batter.

15. Rava Tdli – These quick idlis made with sooji makes for an easy breakfast option. To make instant rava idlis, no grinding and fermenting is required. Few more Idli varieties which you can make for breakfast are:

16. Set dosa – These are very soft, light and spongy dosa variety. These soft dosas are called as set dosa as they are served in a set of 3 dosa per serving. serve set dosa with your favorite coconut chutney, Veg sagu or Potato sagu or veg korma or Idli Sambar.

17. Mysore Bonda Recipe – These are crisp, soft and fluffy fritters made with urad dal (black gram), some spices and fresh coconut bits. There are many variations of bonda which are made like:

19. Aval dosa – this is one dosa that is amazingly soft, spongy, porous and stays so even after some hours. Excellent for tiffin boxes with some dry chutney or Idli Podi. this poha dosa recipe is an Andhra specialty.

20. Poha idli – These are soft, light and fluffy idlis made with poha (flattened rice), idli rice and urad dal. There are few more breakfast Recipes made with poha like:

21. Semiya upma – It is a delicious upma variant made with vermicelli, aromatics, spices, cashews and herbs. This quick and easy breakfast dish is also called as vermicelli upma and has unique flavors and textures. A vegan breakfast option that comes together in under 30 minutes.

22. Ragi dosa – It is a healthy variation of dosa or crepes made with ragi seeds or ragi flour. There are many ways ragi dosa can be made. Ragi dosa recipe is gluten-free as well. I am sharing two tasty and healthy recipes in this post.

Ragi or finger millet or nachni is a healthy grain and I do include them wherever I can, like in making dishes like Ragi Roti, Ragi Ladoo, Ragi Halwa, Ragi Kheer and Ragi Idli. Being very rich in calcium its excellent for women as well as for children.

23. Rava kichadi – This breakfast dish is more like Khichdi and one that is made with rava. I do add some veggies in it to give some texture and nutrition. The veggies that can be added to this dish are capsicum (bell pepper), french beans, green peas and carrots. But you can skip veggies and make it without veggies also.

24. Neer dosa – soft, thin, light and lacy crepes made with rice batter. Neer dosas are easy to prepare as fermentation is not required. Apart from coconut chutney, neer dosa can also be served with Veg sagu or veg korma or potato korma.

25. Oats idli – healthy, tasty and instant oats idli recipe. No fermentation is required to make this quick idli recipe. There are few more breakfast Recipes with oats that can be made like:

26. Benne dosa – These crisp, soft and buttery dosas are from the Davangere city in central Karnataka. These Davangere dosas are not like the regular dosas as the taste as well as the texture is different. They are crisp and yet have a soft, light texture. Davangere benne dosa is usually served with a potato filling (called as potato palya) and a spicy coconut chutney.

27. Paniyaram recipe – These are savory, spiced dumplings made from rice and urad dal batter or Idli Batter, onions, spices and herbs with an occasional addition of fresh coconut. This delicacy from South Indian cuisine makes for a good way to utilize leftover idli batter. They are crisp from out and soft from within. Other delicious variants you may like are:

28. Mangalore buns recipe – These are sweet fried bread made with mashed bananas, flour, sugar and spiced with a touch of ground cumin. These sweet banana buns or poori as they are known is a specialty dish from the Mangalore region in Karnataka. They can be had as a sweet breakfast or even as a snack.

29. Malabar parotta recipe – Kerala parotta is a layered flaky flat bread that is popular across the whole of south India. It is a variation of the North Indian Lachha paratha.

You can serve Kerala paratha with any vegetable curry like Veg korma or potato kurma or Veg Kolhapuri or Veg kadai or lentil curry like Dal makhani or with Paneer butter masala. Even the simple dal tastes so good with the Kerala parotta.

This South Indian Breakfast Recipes post from the archives (December 2017) has been republished and updated on 22 September 2021.