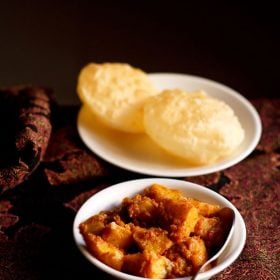 There’s a very special place for the Aloo Dum/Dum Aloo in the Indian cuisine repertoire. For us Indians as well, it is quite a favored dish. There are many variations too that it has. For instance, this here, is the recipe of Bengali Aloo Dum, traditionally called as Alur Dom. This special regional variation is a lightly spiced, slightly sweet, potato curry with onions, tomatoes and a range of spices. Also, if you aren’t using the ghee, you’re making the dish completely vegan as well. 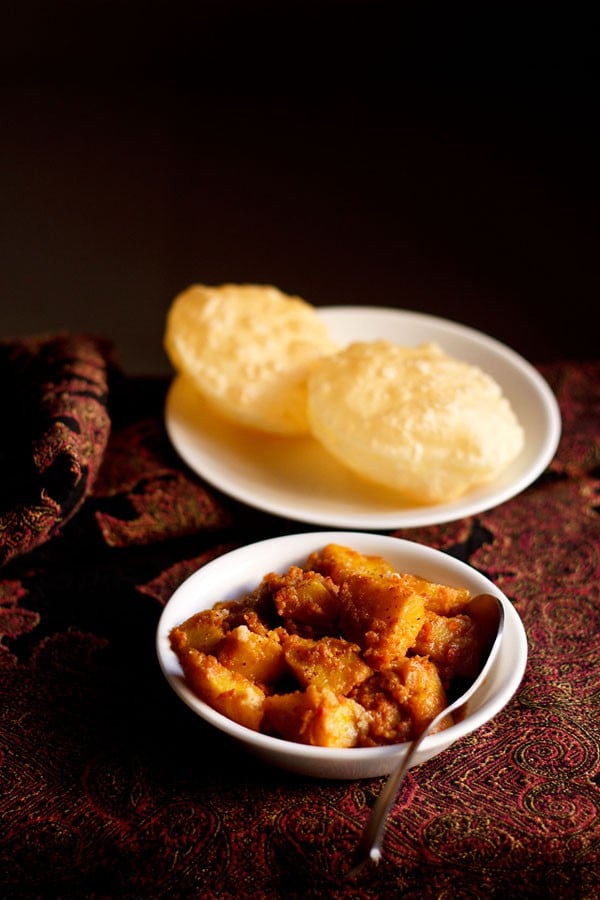 What is Alur Dom

Firstly, don’t be confused with the name as it is just another spelling which abides by the phonetics of the Bengali script. So, when translated into English, it is simply the following:

Dom – Or dum is slow cooked

As I mentioned in my opening lines, there are a number of ways in which this dish is prepared in different regions of the Indian subcontinent. Majorly, it is one of the most important dishes in the Kashmiri Pandit cuisine. This post has the Bengali Aloo Dum and there is another version popular in Banaras, Uttar Pradesh.

You’re lucky that I have all these varieties ready for you, right here. Just follow these recipes of mine to make them: Dum Aloo (this post has both the quintessential Kashmiri style and a Mughlai restaurant style) and Banarasi Dum Aloo. Plus, the post you’re on at present is obviously for the Alur Dom of Bengal.

Since it is an aloo-based gravy dish, it is chiefly categorized under the main course section. In simple words, the potatoes are first fried, then slow cooked or dum cooked in a rich, velvety spiced gravy. This gravy may be made with onions, tomatoes, yogurt/curd, cashew paste, etc. as the dish undergoes specific regional influences.

About This Alur Dom

Whenever you’re in Bengal, at a Bengali restaurant or are planning to prepare a Bengali meal at home itself, a classic combination that you must try is that of Luchi (poori made with all-purpose flour) and Alur Dom. Since I had the recipe of this famous puffed bread, it was mandatory for me to share the recipe of the Bengali Aloo Dum as well.

This pairing is a preferred one at my home as well and it literally has become a fortnightly breakfast. My homemade version of the Bengali style Alur Dom is in 2 ways. Here, I am sharing the method which has onion-tomato in it, which is also a personal favorite.

This Bengali Aloo Dum recipe has been adapted from one of the cookbooks that came along my Hawkins pressure cooker. I had heard about this dish from quite some time. The moment I saw it in that booklet, I had to give it a try. So, I made this dish with my proportions and it did come out very well.

More On This Recipe

While it is best to use baby potatoes for this Alur Dom recipe, I made it with new potatoes. There wasn’t much difference and the dish was just as fab. You can use whichever you get or feel like using. Also, I parboil the potatoes first and then fry in mustard oil.

I puree the onions and tomatoes and the sauté the entire mixture well with spices, again in mustard oil. After adding the fried potatoes, I simmer the curry (basically slow cook) for some minutes till it is ready to be served.

A made for each other match is to have the Bengali Aloo Dum with luchi. But other apt choices can be the Koraishutir Kochuri, Radhaballavi and the regular Poori. Last, but not the least, you can even relish this gorgeous Bengali delicacy with your everyday chapati and roti. 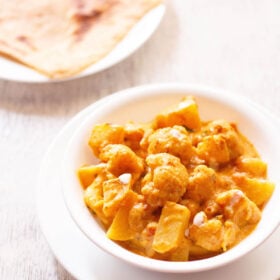 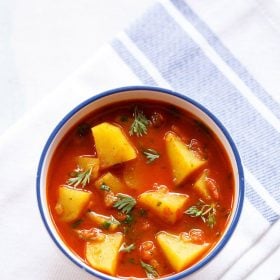 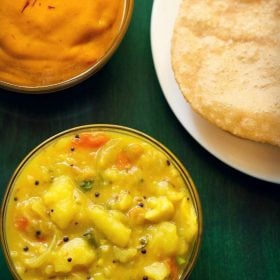 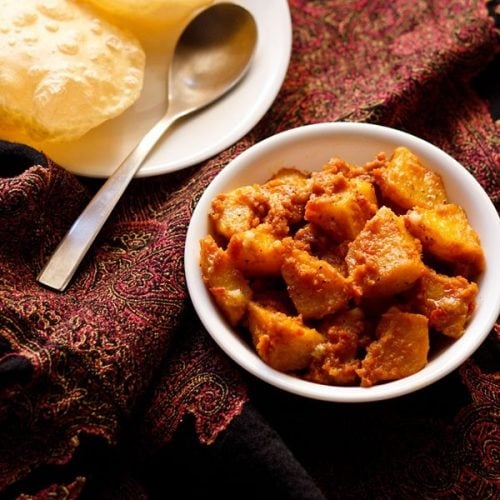 To grind to a semi-fine or fine paste

Make a puree of

This Alur Dom recipe post from the blog archives first published in January 2014 has been republished and updated on 27 July 2022.