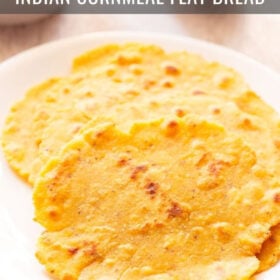 If you’re a fan of flatbreads, you need to try my Punjabi Makki Ki Roti recipe. This corn-based unleavened flatbreads (sometimes called makki di roti) are delicious, slightly sweet from the maize flour or cornmeal, and perfect for a winter lunch or dinner, especially when served with Sarson ka Saag. 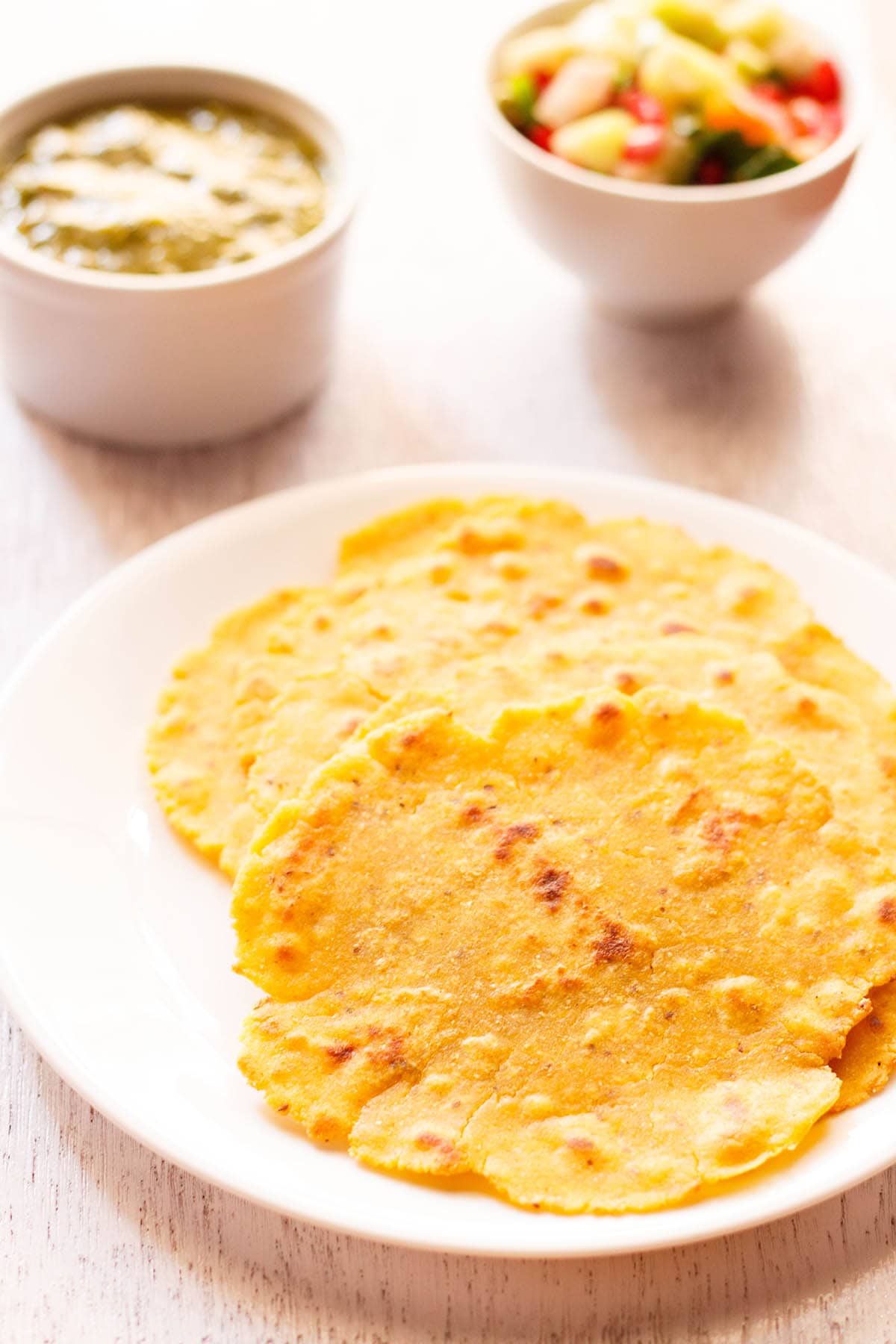 Makki ki roti is an unleavened bread that can be made traditionally (in a tandoor), or using a tawa (flat skillet). Makki di roti are popular flatbreads from the land of Punjab. This famous maize flour bread gets its name from the Punjabi term for maize flour: makki ka atta.

While maize is a term for corn, please note that makki ka atta is different than what we know as “cornflour” in India. What we call cornflour is known as “cornstarch” in different parts of the world, while makki ka atta is finely ground cornmeal.

Makki ki roti is most often served with Sarson ka Saag (sautéed and spiced mustard greens) and a few jaggery cubes; this delicious combo is quite famous and is very healthy.

Makki ki roti goes well with any saag, including Palak Saag (made with spinach), bathua saag (cooked with goosefoot leaves) or Chane ka Saag (prepared with chickpea greens). While saag can also be served with Paratha, these maize-flour flatbreads are always the first choice.

Makki ki roti can also be served plain for breakfast with a cup of Chai. You can also make them with some chopped greens like fenugreek (methi), spinach (palak) or goosefoot leaves (bathua) to the maize flour and make parathas. I usually make this for breakfast in the winters.

Makki di roti is a bit heavy on the stomach when compared with other flatbreads, so I like to add carom seeds (ajwain) to help with digestion.

Maize flatbreads have to be cooked properly, or else you might get stomach pain. I learned how to make makki ki roti from my Punjabi mother-in-law, and the method shared here is exactly the way we make it at home.

Hot water is added to the dough to make the makki ka atta more pliable and easier to roll. If you are having difficulty, adding a bit of whole wheat flour (atta) can also make the roti easier to roll.

These maize flour roti can be a little difficult to work with when you first start. As such, I have shown two methods of rolling makki ki roti in the step-by-step photos; use whichever method makes the most sense to you.

I also suggest that you start by making small roti that are easier to handle and then slowly increasing the size of the makki di roti as you become more comfortable.

How to make Makki ki Roti

1. In a mixing bowl, take 2 cups maize flour or fine cornmeal (200 grams), 1 teaspoon carom seeds (ajwain) and salt to taste. Mix everything together with a spoon.

2. Heat 1 cup water in a separate pan till it comes to a boil. Add this hot water to the flour mixture.

3. Mix with a spoon. Cover and keep aside till the dough cools enough to handle.

4. When the mixture is cool enough to handle, begin to knead to a smooth yet firm dough.

5. As you can see in the photo below, the final dough will have some fine cracks present. This is to be expected.

6. Make medium sized balls of dough, shaping them into a neat balls and flattening them slightly with your palm.

Using ziplock bag: If you don’t have a rolling pin, you can also “roll” the makki ki roti using a ziplock bag. Place the bag on a cutting board, back of a metal tray, or on a surface you can move.

Place the dough ball in the bag. Press it slightly with your hands until flat. The using the rolling pin roll gently to about a size as thin as a tortilla. Move the rolling board and roll again. This is to ensure that all the sides of the makki roti are evenly rolled.

9. Roll into small- to medium-sized rounds. They should be roughly the size of a phulka or chapati, but not very thin. The roti should not break if you handle them carefully. If the rolling pin is sticking, add more flour as required.

10. Makki roti can also be made by patting the dough. To start, sprinkle some maize flour on the dough ball and on the rolling board.

11. Now, with your fingers, gently press and pat the dough. As you press the dough, also move it clockwise.

12. Continue to press and pat the dough till you get a neat roti. Do not make thin but slightly thick roti. When the dough is patted, the edges won’t be as even as if you had rolled it; this is fine.

If you are experienced in making the roti by pressing the palms of your hands together the way our grandmothers and great-grandmothers used to, feel free to make the makki roti this way too.

13. Now spread about 1 to 2 teaspoons of ghee or a neutral flavored oil on a hot tawa or skillet or frying pan. Cook the roti on medium to medium-high heat.

14. Gently place the makki di roti on the tawa. If there is a crack in the roti dough, then gently pat that portion with a few drops of water to seal it shut.

15. When one side is a little browned, flip the makki roti with the help of a spatula.

16. When the other side gets browned, flip again. Flip for a couple of times till the makki di roti is well browned and cooked from all sides. Drizzle a bit of ghee on the sides whilst cooking the roti.

If the dough is kneaded well, the makki di roti will start puffing up. Press the edges with a spatula so that the edges are also cooked well. Continue making all rotis this way until the dough is over.

If you like multi-tasking, you can roll and roast the rotis simultaneously. If you prefer working in stages, you can also roll all the makki ki rotis first. Cover them with a kitchen napkin to keep them from drying out, and then roast them one by one.

Serve the makki ki roti hot with saag and jaggery cubes. We also like to add some white butter on top of the makki di roti while serving; that’s how they are relished and served in Punjabi families.

Can I substitute Mexican masa harina for the makki ka atta?

While I myself have not tried it, I have heard from several of my readers that they have made this substitution with very good results.

Instead of rolling these out, do you think a tortilla press would work?

Yes, it would work!

Can I make these ahead of time?

Makki di roti, much like other types of bread, are best served hot or warm. That said, you can make the dough a day earlier and refrigerate it. Cover the dough with a clingfilm or place in an air-tight container so that it does not become dry.

Can I freeze makki ki roti?

Sure! Once cooked, separate the rotis with pieces of parchment. Place them in a zip top bag and remove as much air as possible. They should keep for up to 2 months in the freezer. To serve, warm them on a tawa until heated through.

How do I keep my makki ki roti from breaking when I roll them?

These flatbreads are a little harder to roll than other types because maize flour doesn’t have gluten. The gluten creates long strands of protein that help hold everything together. Have you ever rolled out a dough for it to spring back somewhat? That’s the gluten at work!

Using very hot water to make the dough helps somewhat. I also recommend rolling them between pieces of parchment paper or in a zip top bag to help keep things together. Finally, don’t be afraid to use your hands to help press and shape the roti as needed.

If you are *still* having a tough time, you can add a bit of wheat flour (atta) to the dough before rolling, which will add some gluten to help guide you. That said, please note that this is not the traditional method of making makki ka atta, and it will slightly change the flavor of the final product. 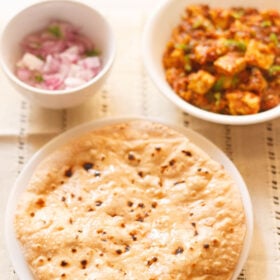 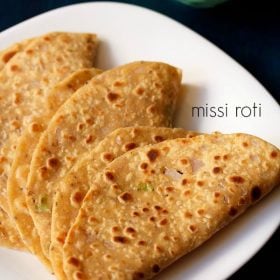 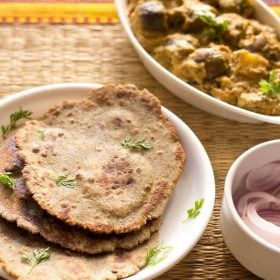 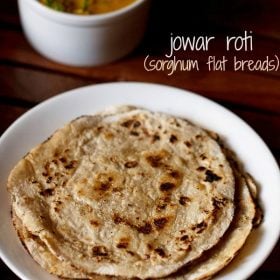 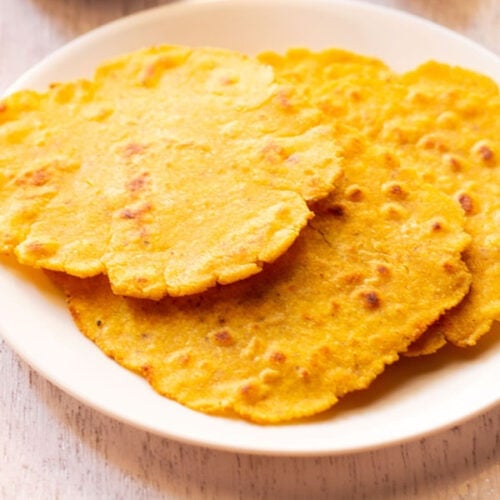 Make sure to knead the dough until smooth but firm. If the dough appears dry or cracked, then add some warm water and knead. If the dough becomes sticky, add more maize flour.

These flatbreads are a little difficult to roll as maize flour does not have gluten. Adding hot water to make the dough helps somewhat when rolling. I also suggest rolling them between pieces of parchment paper or in a ziplock bag to help keep things together. You can also opt to use your hands to help press and shape the roti as needed. If you are still having a difficult time, add some wheat flour (atta) to the dough before rolling, which will make it easier to roll. But note that this is not the traditional method of making makki ki roti, and it will slightly alter the flavor of the roti.

Use the finely ground cornmeal or maize flour to make these flatbreads. Coarser textured flour will be difficult to roll and break or tear.

Instead of roasting with oil or ghee, opt to cook the flatbreads without any fat. Once cooked, you can spread some oil or ghee on it. If you have a tandoor, you can roast these roti inside it. Note that the approximate nutrition info is for 1 makki ki roti cooked with 2 teaspoons of ghee.

This makki di roti post from the archives first published in January 2012 has been republished and updated on 5 December 2021.