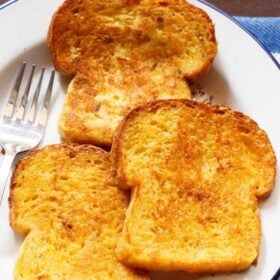 While growing up, French Toast was a loved breakfast at home, made at-least twice a week. As years passed, I began making these with just milk and sugar. Later, I started making this quick and easy French Toast without eggs by using custard powder. Today, this eggless version has become quite a hit at home and I love making it, every now and then. 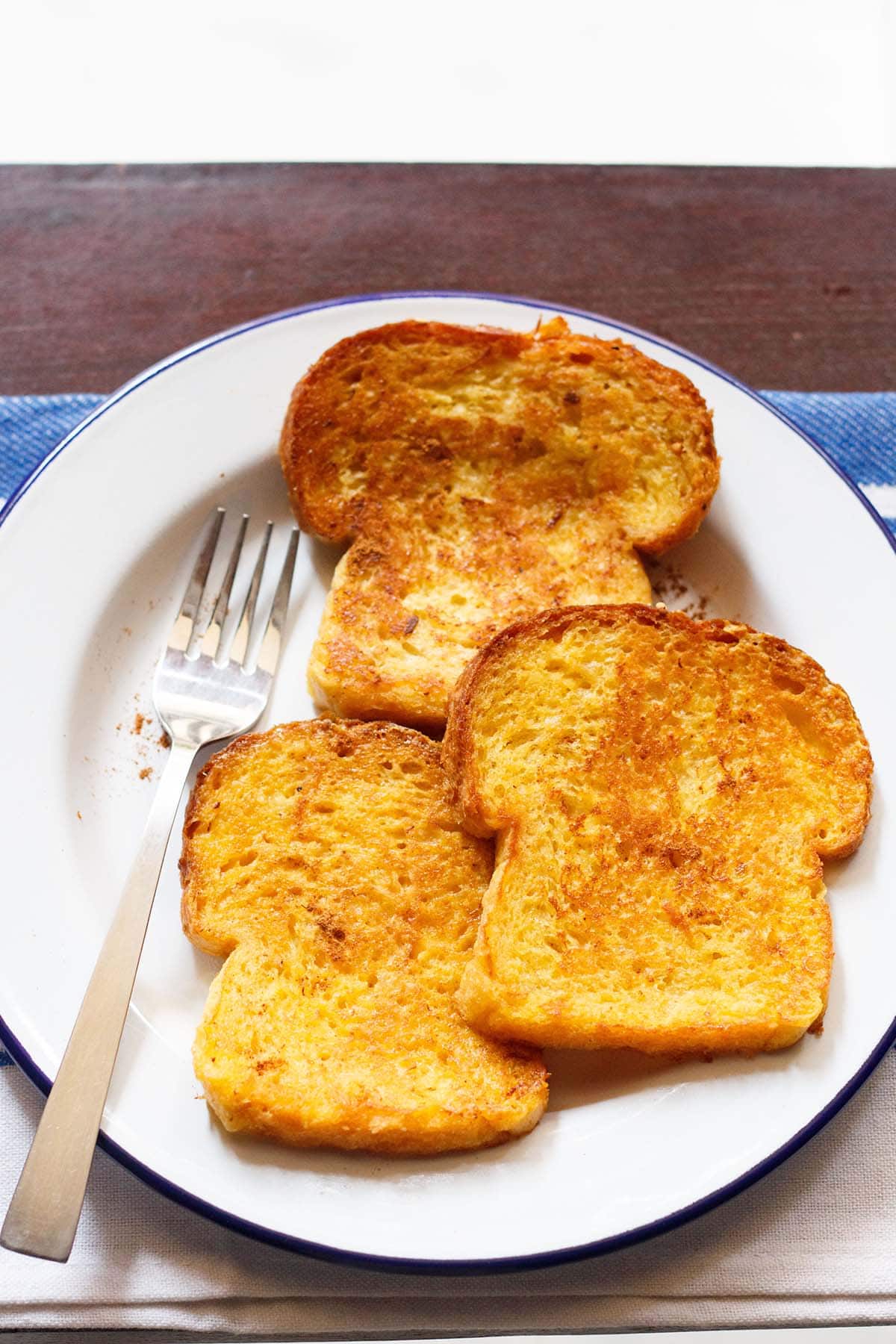 About This French Toast

First things first, the ingredient that replaces eggs in this French Toast is custard powder (can swap cornstarch with custard powder). It works very well for this recipe. With this in particular, the toasts develop a lovely crisp outside on them, while the inside is a soft, creamy texture.

Next comes the choice of bread. While you can use any type of bread – Wheat Bread, oatmeal bread, Brown Bread, White Bread, multigrain bread, brioche or even Sandwich Bread – make sure to use thick slices a few days old bread. A thick slice will avoid the toast from turning soggy after frying. So, best is to slice a whole homemade loaf.

This Eggless French Toast recipe is for keeps and you must serve it immediately or warm. Not at room temperature as then it loses its crispy texture.

These toasts taste just fab with a drizzle of some maple syrup or honey, or topped with some fruits, berries or both. You can even pair this French Toast with milk, tea or coffee for that perfect breakfast. You can also have a few of these together as a part of a beautiful brunch!

How to make French Toast

Tip: Add 2 tablespoons cornstarch in the absence of custard powder. In this case, add 1 teaspoon vanilla extract or vanilla essence.

2. Now, add ½ cup milk. You can even use oats milk, cashew milk or almond milk.

3. Keep on stirring till all the sugar is dissolved. There should be no lumps in the mixture.

4. Now, heat a well seasoned skillet or frying pan. Add ½ teaspoon butter. You can use salted or unsalted butter. I use salted butter as it gives a good taste.

5. With a spoon, spread the butter on the pan.

6. Dip a bread slice in the custard-milk mixture. It is better if the bread is a few days old. Let the bread absorb this mixture. But remember not to make the bread soggy.

Every time before you dip the bread, do stir this mixture as the custard powder settles down.

7. Remove the bread slice and place it on the pan. Toast on low to medium heat.

8. When the base gets golden, flip the bread and toast the other side.

9. Flip again. You can even flip once or twice for an even cooking and golden color.

10. You can also fry two or three slices at a time. In this case add 1 to 1.5 teaspoons butter, respectively.

11. Fry the slices in the same way by toasting each side until crisp and golden.

12. Remove the bread slices on a plate or tray.

13. I sprinkled some ground cinnamon on the French Toast and served them. You can serve these plain or topped with some maple syrup or berries or fruits.

French Toast, Not So French

Yes, its true. The French Toast is not exactly a French invention. In fact, it is believed that the existence of this popular breakfast dish dates back to the Roman Empire in the early 2nd century AD. And this is much before France was existed as a country!

Apicius, a recipe collection from the same era, mentions an ‘aliter dulcia,’ which meant ‘another sweet dish.’ This method was primarily to dip large bread pieces into an egg-milk mixture, fried in oil and served with honey.

Another myth about this dish is, in 1724, the recipe was created by chef Joseph French in America. He misspelled the name of the dish without the apostrophe. Thus, French’s toast became French Toast.

Other early names of the French toast are:

Some of those are:

Is it necessary to add the vanilla extract in the first step?

No, it is not. You can skip using it.

What is the reason for the sogginess of the French toast?

The sogginess can be due to the type of bread. Make sure the bread slices are slightly large and thicker, so that they can hold just the right amount of the custard mixture. Thinner bread slices will absorb too much custard mixture and will not be crisp. Also do not use fresh bread but a few days old bread.

How can I make French toast without eggs?

In this Eggless French Toast recipe, the eggs are substituted with a custard powder. You just need to mix together custard powder, sugar and vanilla extract (optional).

Pour in milk and stir till the sugar is dissolved and a lump-free mixture is formed. Then, dip bread slices in it and fry on a buttered pan till golden from both the sides.

How can I serve this French Toast?

You can sprinkle some cinnamon powder, powdered sugar on top and serve with maple syrup, honey or fruits.

In this recipe, what is the substitute for custard powder?

If you are not using custard powder, then add cornstarch. When adding cornstarch, also add vanilla essence for a flavor.

Can I add egg in this recipe?

Yes. 1 egg in place of custard powder and reduce the quantity of milk as needed. 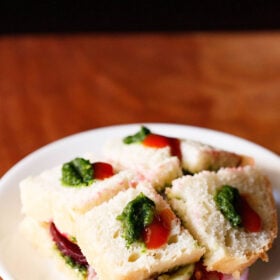 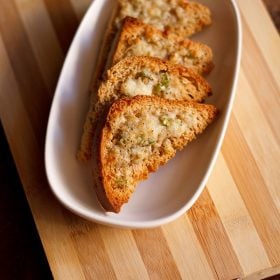 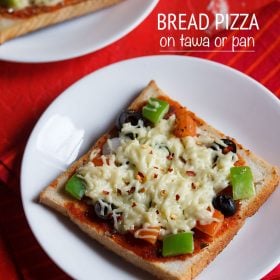 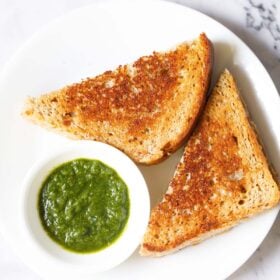 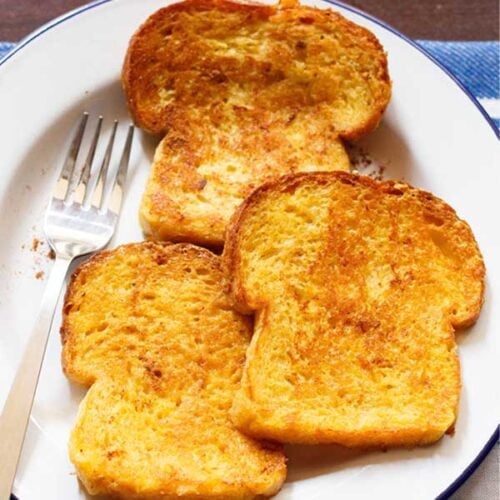 An easy, homemade and quick version of french toast made without eggs. These eggless french toast made with milk, sugar and custard powder are both crispy and soft and will have you asking for more.
4.92 from 12 votes
Print Pin Save Saved! Rate
Prep Time 3 mins
Cook Time 12 mins
Total Time 15 mins
Cuisine French, World
Course Breakfast, Desserts
Diet Vegetarian
Difficulty Level Easy

This French Toast without eggs from the blog archives first published in October 2015 has been republished and updated on 7 Jun 2022.