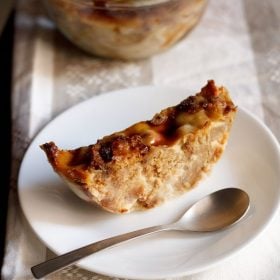 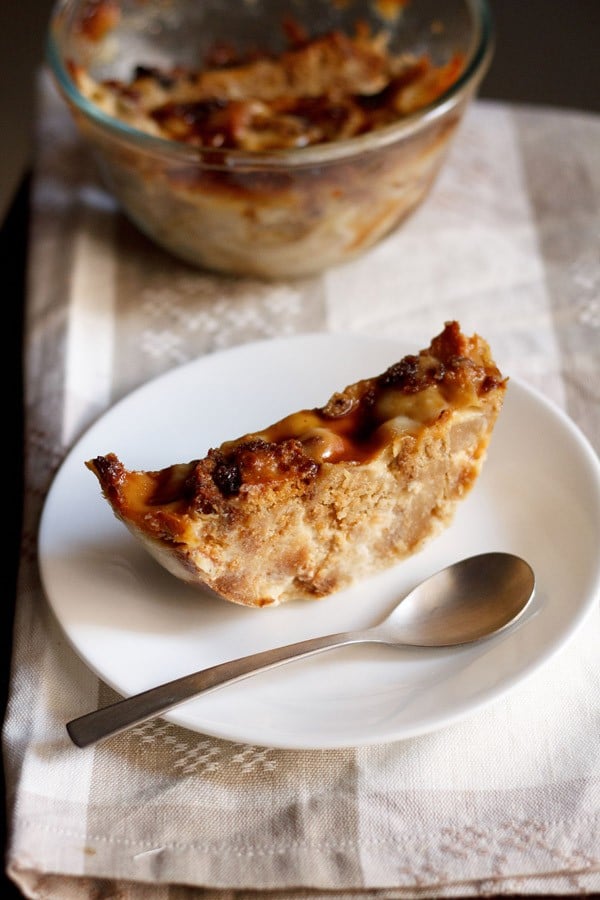 The eggless custard is easy to make and this recipe can be used as a custard base for any recipe that involves custard. No custard powder is added to prepare the custard. The thickening agent added is corn starch or as we Indians call it – corn flour.

The recipe method has been loosely adapted from About.com. the original recipe uses eggs, but since I know how to make an eggless custard sauce, I have used my own recipe to make the custard sauce.

I made the pudding with homemade whole wheat bread. I was experimenting with a different technique for whole wheat bread than the bread recipe that is already posted on the blog. The result was somewhat dense bread.

From half of the loaf, I made Bombay veg sandwiches and the remaining half I made the eggless pudding. I usually make this pudding with either homemade whole wheat bread or homemade brown bread as obviously they are more nutritious than white bread.

Bread butter pudding goes extremely well as a dessert in itself. You can top the pudding with chocolate sauce or caramel sauce, if you prefer. Sometimes I sprinkle brown sugar on top before baking the pudding (pic above). After getting baked there is a lovely aroma from the caramelized brown sugar.

Few more tasty recipes for you! 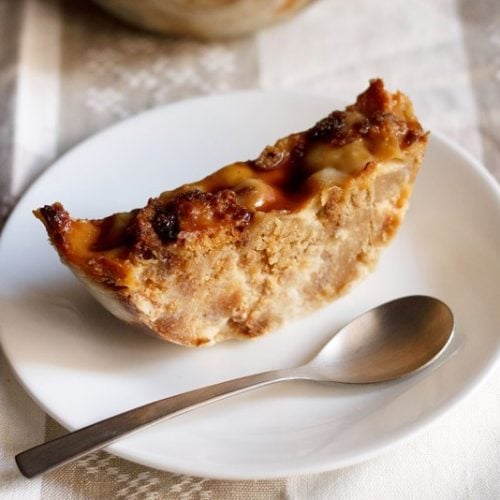 How to make bread butter pudding

1. Spread butter on the bread slices. Slice them in cubes, squares, triangles or rectangles. i chopped into small cubes. You can keep medium to large triangular or rectangular slices. since these were homemade bread, I have not sliced the crusts. You can if you prefer.

2. layered the bread buttered side up, in a greased baking tray. Sprinkle the bottom layer with some raisins. Layer again with bread slices. Lastly again sprinkle some raisins on top and keep aside. 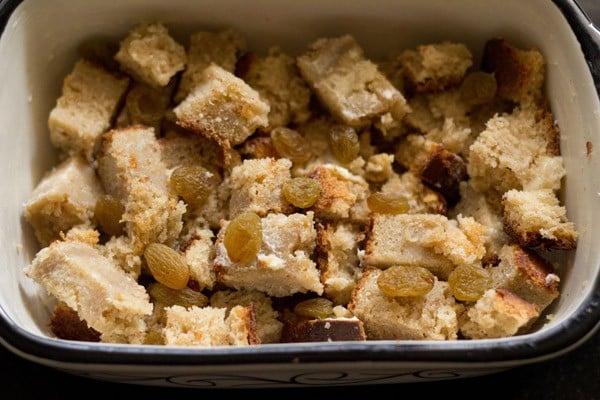 4. in another broad pan or a sauce pan, mix milk, sugar and corn starch very well. 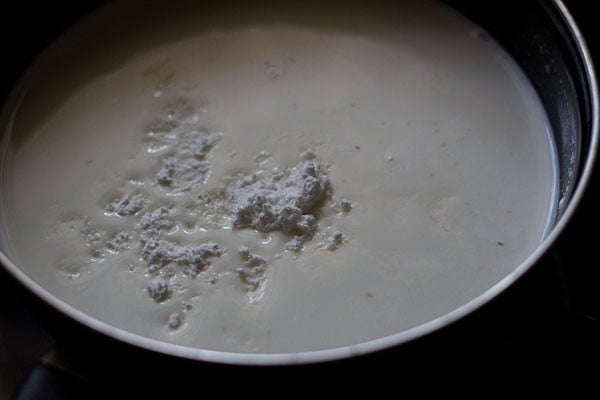 5. Bring this mixture to a gentle simmer on a low flame. You just need to gently heat the custard sauce mixture and stir it often. 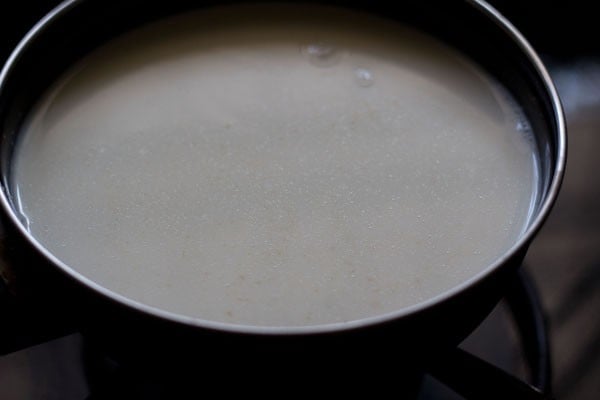 6. The sauce would start to thicken. Continue to stir so that no lumps are formed. 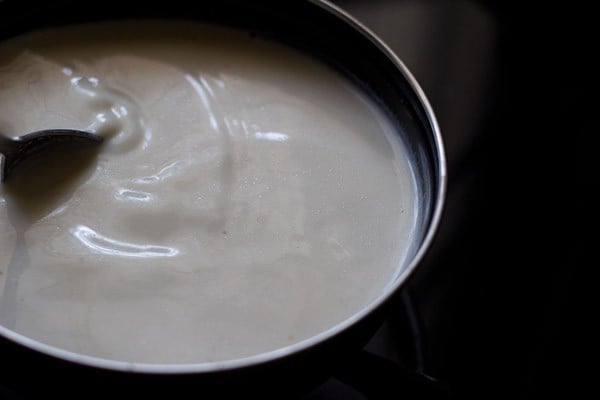 7. The consistency should be thick like that of a custard sauce. 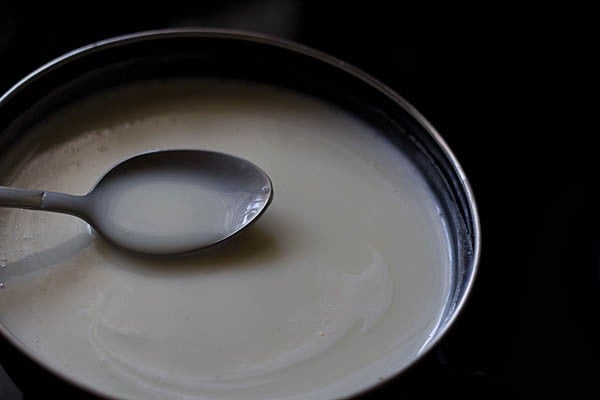 8. Once the sauce is thickened, add vanilla extract and nutmeg powder. 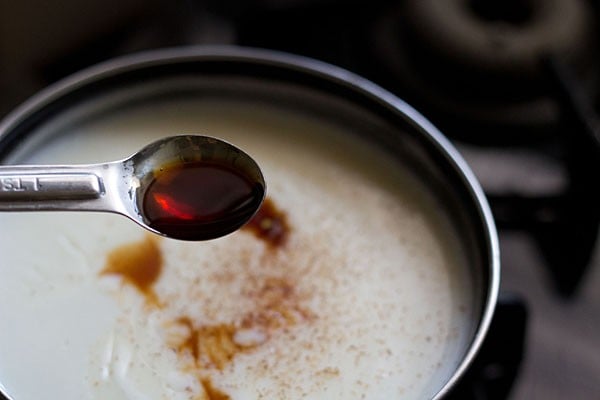 9. stir and pour this eggless custard over the bread layer. 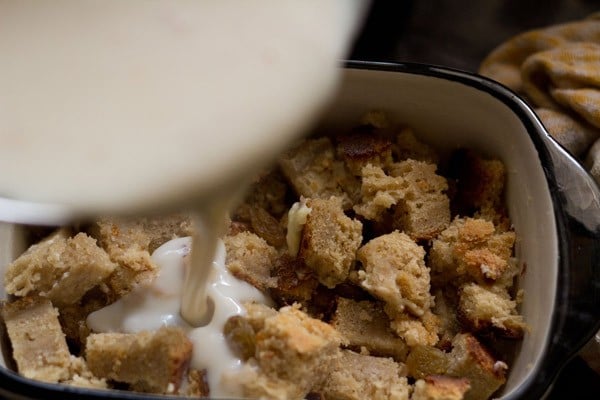 10. bake in a preheated oven at 180 degree C/356 degrees F, for 35 to 40 mins (Please check notes in the recipe details for baking time), till the tooth pick inserted in the center of the pudding comes out clean and the pudding is set firmly. the top will also get browned. I had to use two baking pans for the pudding. This pudding can even be made in medium to large ramekins. 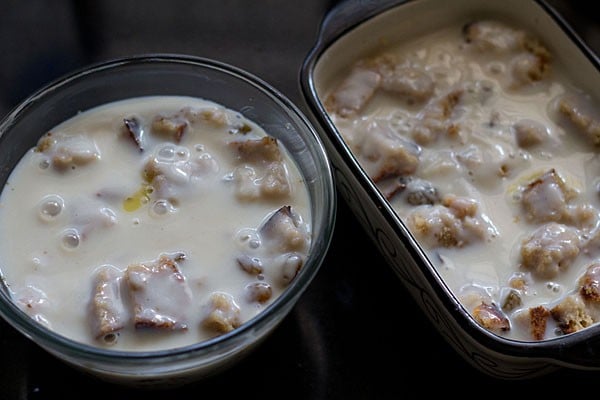 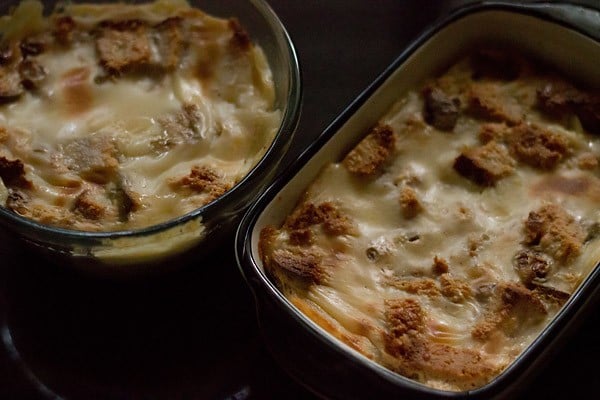 12. Let the pudding become warm or cool down and then slice and serve the eggless bread butter pudding. 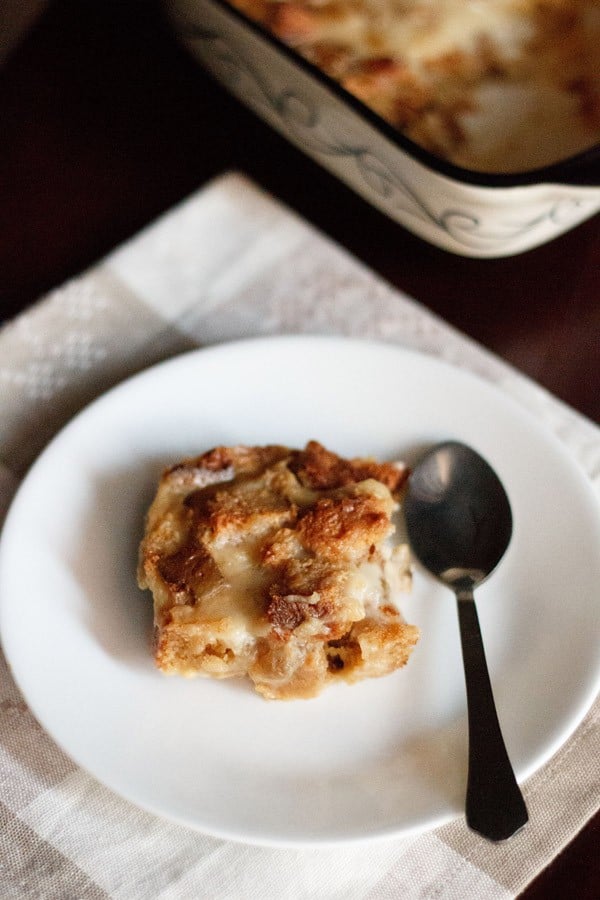