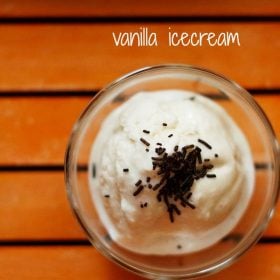 If there’s one ice cream flavor that is ubiquitous across the country and the world at large, it has to be the Vanilla Ice Cream. So, on this post of mine, I have shared a simple eggless recipe of the same that results in a creamy, soft and delightful vanilla flavored ice cream. This step-by-step procedure will help you churn the best product of this quintessential ice cream flavor at home. The recipe has minimal ingredients and the ones that won’t get you stressed while you are sourcing them too. You’ve got to try it! 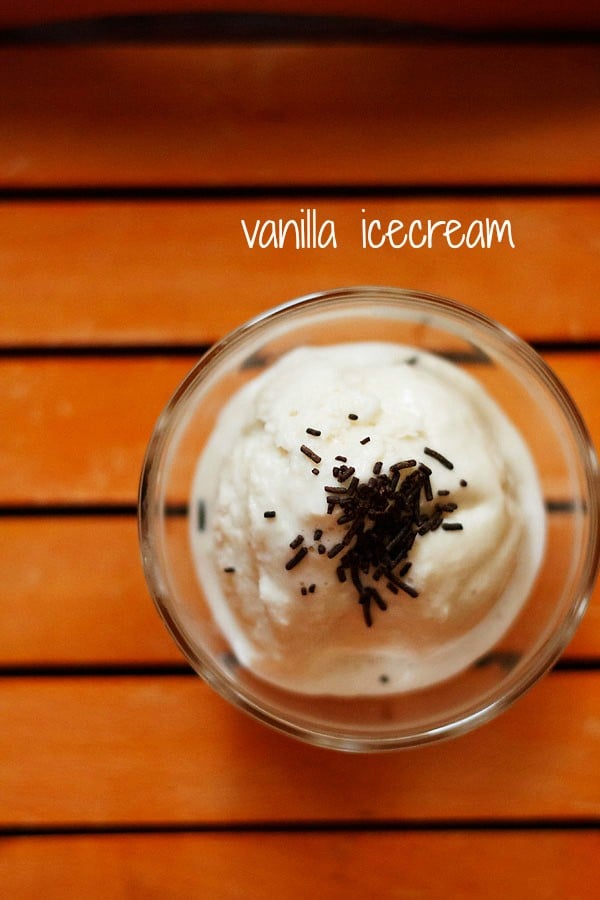 Come summers, come the array of ice creams and other similar cold/frozen sweet dishes that especially the Indian cuisine houses. Since summers and ice creams are synonymous, then why not have the perfect recipe for a classic Vanilla Ice Cream as well!? This post is just that.

Most of us like to have ice creams or Kulfi during summers. And when it comes to ice creams, the undefeated champion is the Vanilla Ice Cream. Why? Because it is simple and basic. So, can be easily jazzed up to something really fancy as well and made into a complete, good-looking dessert itself.

Before I go more into the details of this recipe, here’s some more scoop on the Vanilla Ice Cream. Till the 1760s, none of the ice cream recipes featured vanilla as the common flavoring. It was considered as rare as any other fancy food stuff or ingredient.

According to food historians, it is believed that the famous American philosopher and statesman Thomas Jefferson can be regarded as the ‘father of the Vanilla Ice Cream’ in USA. He came across the flavor in France, after which he introduced the recipe to the Unites States of America. He also had his version of the recipe for Vanilla Ice Cream.

The popularity of Vanilla Ice Cream reached its peak by the early 19th century, when this ice cream flavor was touted as the most common one.

For making this Vanilla Ice Cream, a custard is prepared first. Whipped cream is folded in the custard and then kept to freeze. There are other variations too, with some being very quick and some taking time.

Since it is very hot at my area of stay, the Vanilla Ice Cream would begin to melt as soon as I would serve or take pictures. I tried a lot of times to get a neat frozen ice cream picture. But the temperature was very unforgiving. Thus, ended up with what you see on this post. However, trust me, the taste is just on-point.

You can serve the Vanilla Ice Cream plain or topped with a chocolate or caramel sauce. You can also serve the ice cream with fruits like chopped mangoes, a mix of fruits and berries, dry fruits and nuts.

How to make Vanilla Ice Cream

1. Before you begin, set the temperature in the refrigerator to its highest cold setting.

5. Keep this pan on the stovetop and begin to heat it. Stir, so that the sugar dissolves.

7. Stir quickly, so that lumps are not formed.

8. Simmer on low to medium heat till the milk thickens. Stir often while the milk is thickening, so that the milk does not get browned or burnt from the base.

9. The custard sauce should coat the back of a spoon.

10. Take this custard sauce mixture in a bowl and allow it to become warm or cool. Then, keep covered in the freezer for 45 minutes to an hour.

11. Remove from the freezer. Change the temperature setting of your refrigerator back to the earlier one.

12. With an electric beater, beat on a medium to high speed for 1 to 2 minutes. You can also beat in a blender or mixer jar.

You can use heavy whipping cream having 36% fat and above. Even malai (cream that floats on top of milk or clotted cream} can be used.

Remember that the cream or malai has to chilled or cold.

15. Begin to whip the cream on medium to high speed.

18. Add the whisked custard sauce to the whipped cream-vanilla mixture.

19. Fold gently and lightly, taking care that the ice cream mixture holds the volume and does not fall flat.

20. Here’s the Vanilla Ice Cream mixture ready to go in the freezer. Cover the bowl tightly with a lid, aluminium foil or cling film. Keep in the freezer.

21. When the ice cream is semi-set after 4 to 5 hours, remove and whip again very well in the same bowl. I did not take picture of this step as I whipped the ice cream in the night.

Again, cover tightly and keep the ice cream in the freezer till it is completely set. The picture below is that of ice cream after it is set. If you want a smoother texture, you can whip twice or thrice too.

22. When the ice cream is well set, scoop and serve Vanilla Ice Cream in bowls or plates.

You can top the ice cream with any sauce (chocolate or caramel) or fruits or serve it plain. You can even garnish with chocolate sprinklers or chocolate chips. 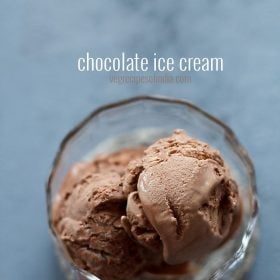 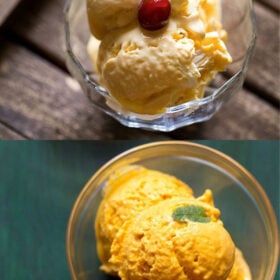 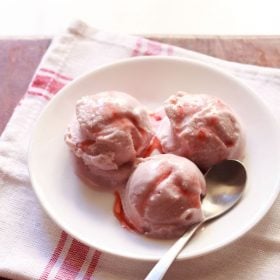 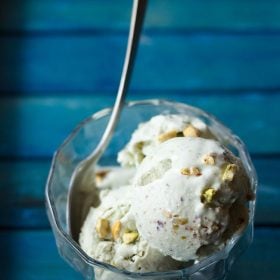 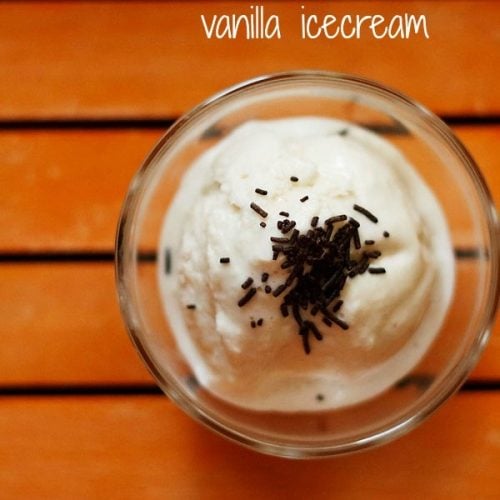 This Vanilla Ice Cream from the archives, originally published in May 2015 has been updated and republished on February 2023.