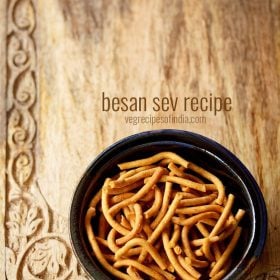 I’ve got one of those quintessential Diwali snacky treats for you in this post of mine. Call it Besan Sev or Karasev or just Sev, these medium-thick, crispy and tasty spiced strands are just a thing of awesomeness. Gram flour (besan), some spices and seasonings are turned into a dough and fried to a golden perfection. This Sev recipe is also quick and isn’t any rocket science to get done with. I’d say, save this Sev Recipe for a yummylicious homemade snack. 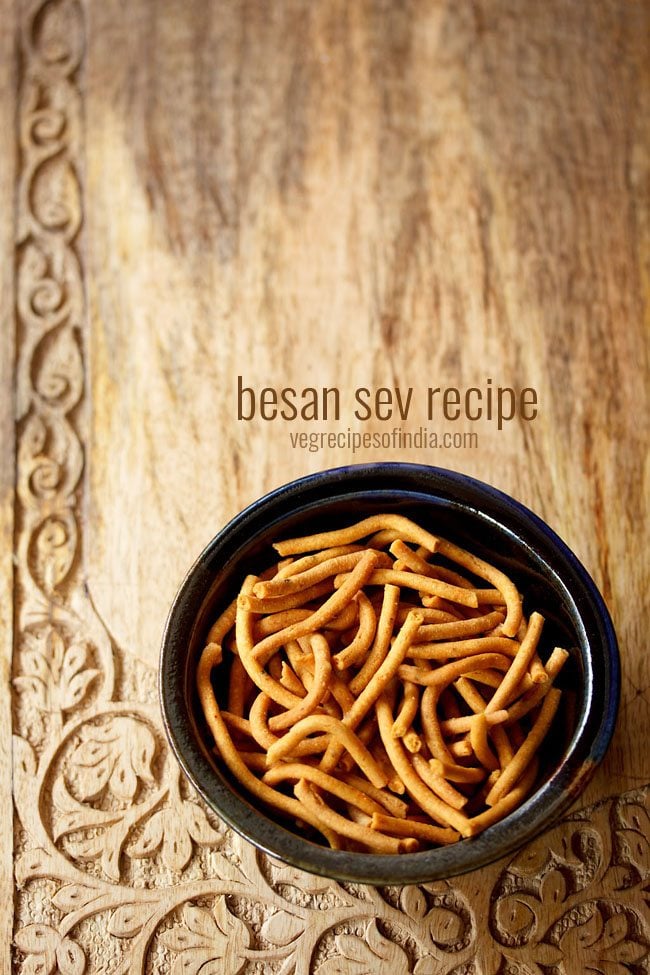 Sev is a fried snack made with a dough of lentil flours, spices, herbs and seasonings. Besan Sev is one of the most popular variants and thus, also an important part of all those Diwali binge sessions.

To explain what a Sev Recipe basically is – this is nothing but a soft, smooth, spiced and seasoned dough majorly of gram flour (besan/chana dal flour), added to a chakli maker and pressed into thick strands or noodles in hot oil, which fries them to a golden crunchy, munchy snack.

You can consume the Besan Sev just as it is or as a tea-time snack. However, many chaat dishes like Sev Puri and Bhel Puri also use it as a finishing topping. In Bihar and Uttar Pradesh, you may be able to enjoy it with sweetened boondi.

If you are in Indore in Madhya Pradesh, the poha there will be topped with a special Indori Sev. Whatever it is, Sev does bring an added texture of oomph in any dish, it becomes a part of. I’ve got this Indori Poha recipe as well for you to try.

While this Sev Recipe is the one that will give you thicker strands of a spiced gram flour dough, there are other regional variations (like thinner and even more thick, and with a variety of ingredients) that you will come across in different parts of India.

Today, most of these types of Sev are also available at any good grocery store in your city or even online. Some popular ones include the Nylon Sev, Mota Sev, Ratlami Sev, Palak Sev, Tomato Sev, Aloo Bhujiya Sev and Rajgira Sev.

This Sev Recipe is again my mother’s recipe. This Besan Sev is medium spiced and the texture is super crisp. You can also refer to it as Masala Sev or Karasev since spices like turmeric powder, red chili powder, asafoetida and carom seeds are added in it. You can also make Karasev if you intend to mix it in a Mixture Recipe.

These spices can definitely be adjusted as per your taste and preferences. Also, whether to add the baking soda or not in this Sev recipe is a personal choice. I have not added it while making the Karasev, but you can for sure. Hence, I have mentioned it as optional in the ingredients list as well.

You will also require a chakli press for making this Sev. The discs with slightly larger holes will be required for this particular recipe. Although, I made a small batch while for documenting it for the blog post. But if you want to make for more number of people, scale the recipe accordingly.

Being a fried snack, Besan Sev has a good shelf-life, which can extend up to a couple of months. However, make sure to keep it packed in air-tight jars or boxes. Another similar recipe that you can try out is this South Indian style Omapodi.

How to make Sev

1. Measure and keep all the ingredients ready for Besan Sev. Then, sift 1 cup gram flour (besan) and set aside.

3. Add ¼ teaspoon carom seeds (ajwain) and a pinch of asafoetida (hing). If you are using baking soda, then add it now.

5. Heat 2 tablespoons of oil in a small pan.

6. Make a small depression in the center of the gram flour mixture.

8. Allow the oil to become warm.

9. When the heat of the oil is enough to handle, begin to rub the oil in the flour mixture till you get a breadcrumb like texture in the mixture.

15. For making the Karasev, you will require the discs with slightly larger holes. Grease the murukku or chakli moulds and the discs with little oil. Place aside.

16. Place the greased disc towards the bottom of the cylindrical mould.

17. Rub a bit of oil in your hands. Take a portion of the dough. Roll it into a log and gently place in the sev maker vessel.

18. Cover the sev maker with its lid.

19. Heat 2 cups oil in a pan or kadai on medium heat. The oil has to hot before you fry the Sev.

You can do a small test by adding a piece of dough. If it rises steadily and gradually, then the oil is hot.

20. In the hot oil, directly press the sev maker to make Sev. Move in a circular motion so that Sev is equally distributed.

21. The oil will sizzle as soon as it comes in contact with the Sev.

22. When one side is golden and crisp, gently turn over and fry the other side.

23. Fry until the color changes to golden and the Sev appears crisp. The oil will also stop sizzling once the Karasev has fried well. Remove with a slotted spoon from the oil.

25. Repeat the same with the rest of the dough and fry Karasev in batches. Do not overcrowd the pan or kadai.

26. Once the Besan Sev comes to room temperature, break them and store in an air-tight container. It should last for about a month. Serve the Besan Sev as a Diwali savory snack or tea time snack. 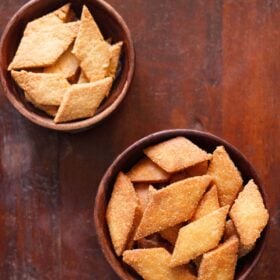 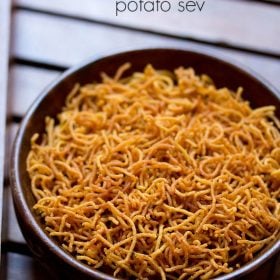 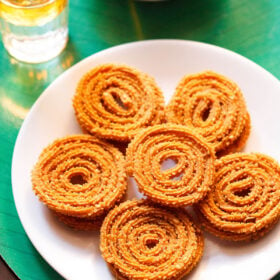 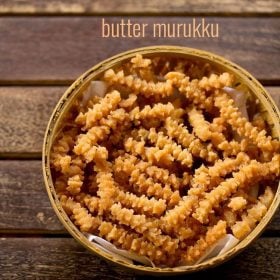 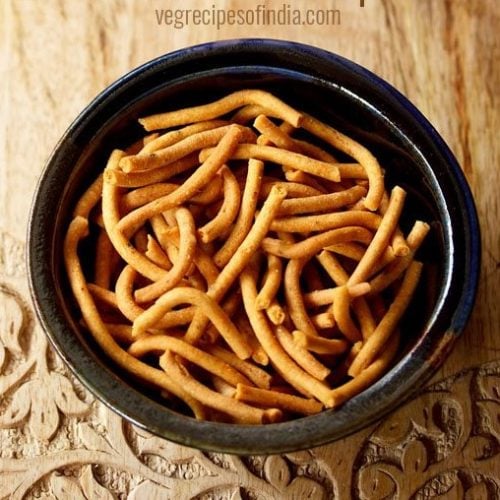 This Sev Recipe from the archives first published in October 2016 has been updated and republished on 21 October 2022.