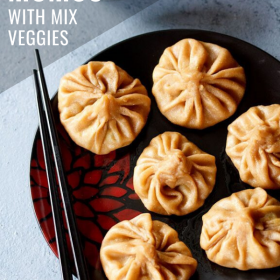 Since I had posted the Veg Momos recipe, I had to also share the healthier version of this loved by all, super popular street food in India. This is my Wheat Momos recipe that is made with whole wheat flour. Just like the Veg Momos, these Atta Momos are vegan too and includes a savory vegetable stuffing. 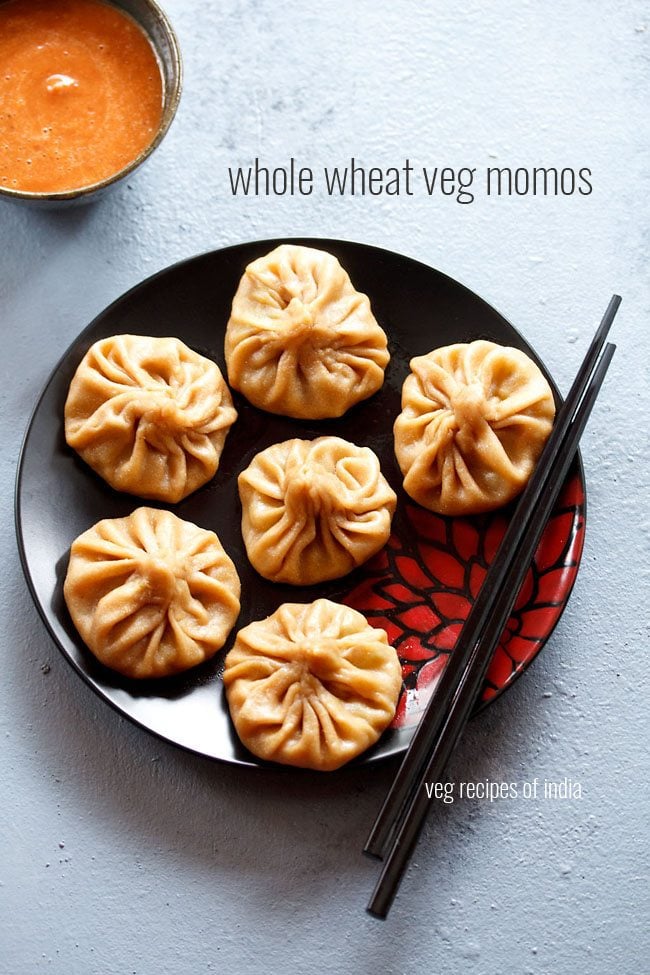 I did really get a lot of requests as well as queries from my readers on how to make momos from whole wheat flour after my Veg Momos recipe was live. I had decided at that time itself that I will definitely be working on a full-proof Wheat Momos recipe and sharing it soon.

The day I tried these Wheat Momos or Atta Momos as I like to call them, I also made a fiery tomato dip that only accentuated the flavors of these momos. So, while you are planning to go for this wholesome Wheat Momos recipe, do check this Momos Chutney as well. Its going to be just the perfect accompaniment to the momos.

I have used a method similar to that of my Veg Momos recipe for making these Wheat Momos as well. However, the stuffing in these momos made with ‘atta’ is slightly different as I adapted it from a Nepali cookbook.

Basically, the mixed vegetable stuffing in the Wheat Momos recipe is not cooked in oil. It is prepared, spiced, seasoned, filled into the momos and steamed all together.

As the preparation of the momos does take some time, I suggest the you grate/chop your veggies (use a food processor to make it even faster!) a night prior and refrigerate them.

Another very important thing to note in this Wheat Momos recipe is that it does not have any fat except for some oil used for greasing the steamer pan. So, it is overall a no fat, extremely healthy recipe too.

Keep in mind that the flour used to make the dumplings is “atta” which is variety of whole wheat flour that is used to make roti.

To make atta the wheat grains are usually stone ground. I have not tried making this recipe with roller milled wheat flour that is mostly available outside India.

While I have used a steamer to steam these Atta Momos, you can even do so using a stove-top pressure cooker or your regular idli pan or in the Instant Pot too. Whatever you have at home, works well.

Here is how you steam using these two different cooking equipment:

How to make Wheat Momos

3. Mix and then begin to knead to a soft dough.

4. Cover the bowl with a lid and let dough rest for 30 minutes.

5. Finely chop or grate all the vegetables. You will need the following veggies:

Take the chopped vegetables in a mixing bowl.

7. Next, add the following ground spices:

8. Season with salt according to taste.

9. Mix everything well. Do check the taste and add more salt, red chili powder or black pepper powder, if required. Keep aside.

10. Divide the dough in small or medium size balls.

11. Sprinkle some flour on a dough ball.

12. Roll each dough ball into a thin circle of about 4 to 5 inches in diameter. Try to get the edges to be thin and the center to be thick.

13. Apply water with your finger tip or with a small pastry brush on the circumference or edges of the circle.

14. Place 2 to 3 tablespoons of vegetable stuffing in the center.

15. Lift one side of the edge and start to pleat.

16. Start folding and forming the pleats one by one.

17. Towards the end, join the pleats in the center.

18. Prepare all the momos this way and keep them covered under a moist napkin, till you are ready to steam them. I kept them directly in the greased pan and covered with a moist cloth while shaping and folding other momos. Keep some space between them so that they don’t touch each other.

19. Grease the steamer pan very well with oil and keep aside.

20. Heat 2 to 2.5 cups water in a steamer, an electric cooker or in a pressure cooker. Let the water come to a boil. Place the pan with momos in the steamer.

Check notes in the recipe card below on how to steam them in an idli pan or pressure cooker.

21. Steam the Wheat Momos for 10 to 12 minutes. Don’t overdo the steaming, as the dough becomes dense and dry.

The steaming time may vary upon the thickness of momos’ cover and the size of momos. If you make small momos, then 6 to 7 minutes is fine for steaming.

When you touch the momo, the dough should not feel sticky to you. This means they are done well. The steamed momos should also have a glossy look.

The time of cooking also varies from the intensity of the flame and kind of pan and the steamer you are using.

22. With the remaining dough, I experimented frying a few momos. Since the dough was soft, the crust was also soft.

Yet the fried momos tasted good. If you plan to fry, then make a firm and tight dough. I made these in the shape of gujiya (karanji).

23. Serve Wheat Momos or Atta Momos with any spicy sauce like Schezwan sauce, tomato-chili sauce or chili sauce. You can also serve them with chili garlic chutney. 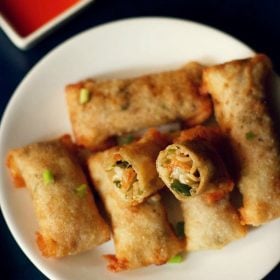 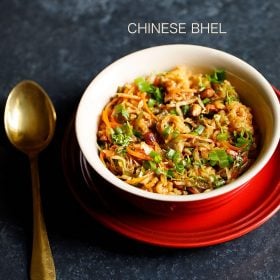 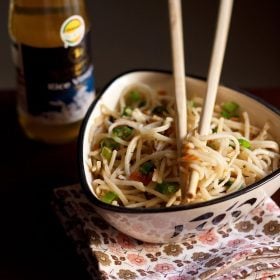 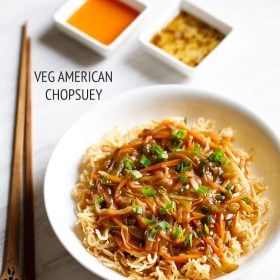 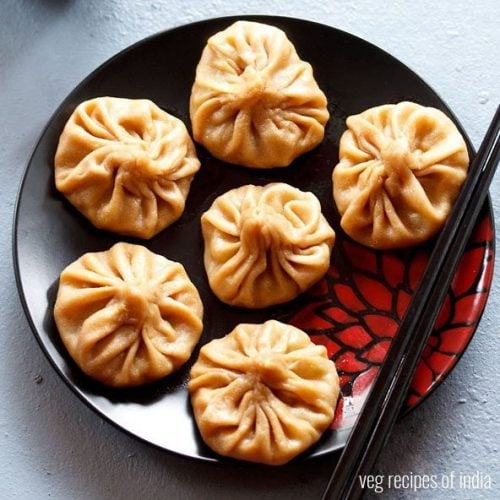 For the dough cover

To steam in a pressure cooker – Heat about 2 cups water in a stovetop pressure cooker. Place the dim sum in a pan inside the cooker. Remove the vent weight/whistle and steam them for 10 to 12 mins on medium heat. If undercooked, then steam for a few more minutes. The water should not come in contact with the momos. To steam wheat momos in an idli pan – Proceed same way, you make the idli. Heat water in the pan. Grease the idli moulds with oil. Place the dim sum on the idli moulds. Place the moulds in the pan and steam them for 10 to 12 minutes on medium heat.

This Wheat Momos post from the blog archives first published in September 2016 has been republished and updated on 1 July 2022.