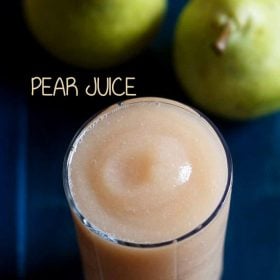 Pear juice recipe with step by step photos – refreshing and energizing pear juice. Pear is known as nashpati in hindi. Usually we have fruits directly, but on occasions I also make fruit juices. 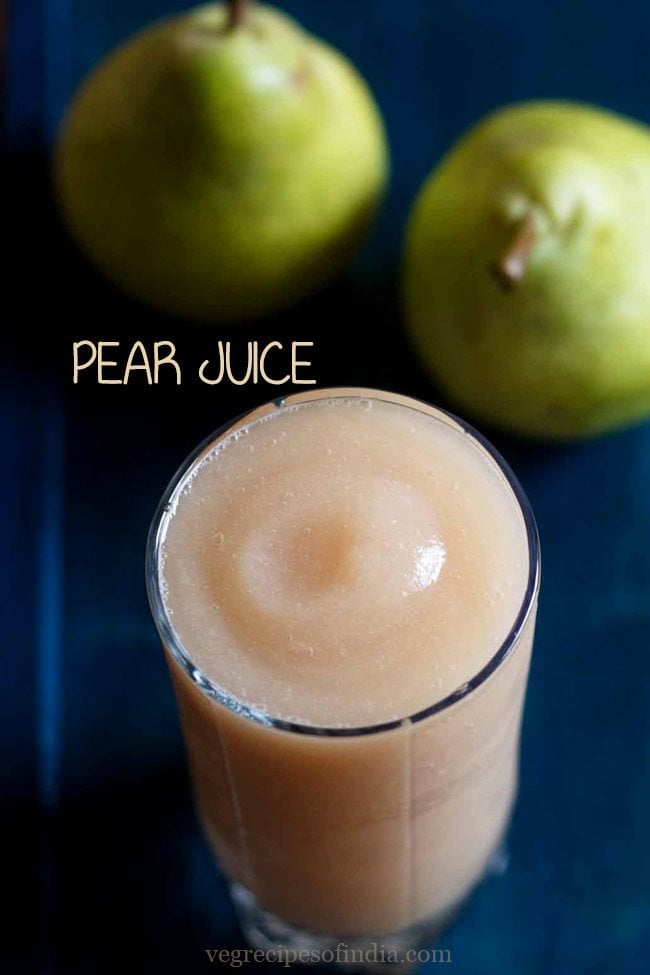 Since pears are in season I thought of sharing pear juice recipe. The taste of pear juice gives a hint of apple flavor and is quite refreshing. Adding ice cubes are optional but chilled juice tastes better. If you don’t want to use ice cubes then you can also use chilled water.

Preparing pear juice is easy, just peel and then chop them. Then blend them in a juicer or blender. I prefer making juices in a blender and then later I sieve the juice and serve immediately. Preparing juice in a juicer takes time in cleaning the various parts of it.

Pear has 84% water, 15% carbs and good source of dietary fiber as per wikipedia. Pears are also rich in minerals and antioxidants so do include them in your diet. Pear is an underrated fruit but it is as good as an apple.

Some international desserts which are made from pear are poached pear, pear jam, pear pie and pear cake. In India mostly pear chutney, nashpati halwa and nashpati murabba (pear preserve) are made.

How to make Pear Juice

1. Rinse 3 to 4 medium to large sized pears (nashpati) and then peel them.

2. Core and chop the pears.

3. Take the chopped pears in a blender jar or juicer.

4. Add ½ tablespoon lemon juice. Adding lemon juice prevents discoloration of the juice and also gives a nice tang to the juice. If you want to make it more healthy then you can add mint leaves or chopped ginger also at this step.

5. If you like a sweeter taste then add some sugar or honey but do keep in mind pear is a sweet fruit. So add sugar accordingly. add ice cubes. If you do not like your juice to be cold, then add ¼ cup water which is at room temperature instead of ice. You can also use chilled water instead of ice.

7. Sieve the juice on a mesh strainer. If you have used juicer, then you don’t need to strain the pear juice.

8. Pour the pear juice in tall glasses and serve immediately.

If you are looking for more Juice recipes then do check: 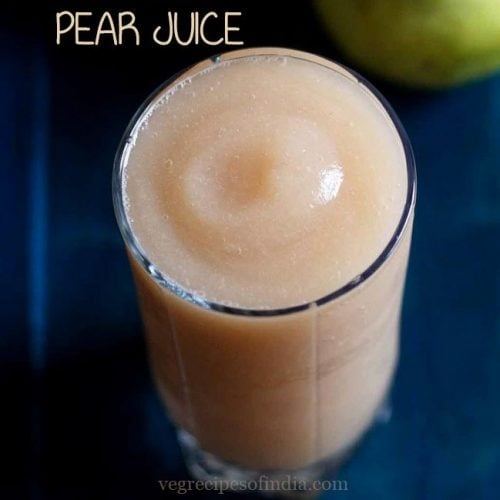