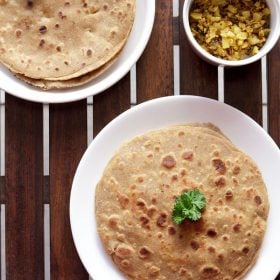 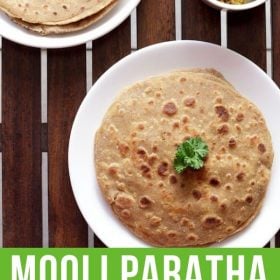 Mooli paratha is a popular Punjabi whole wheat flatbread made with unleavened dough and filled with spiced grated radish stuffing. They are often made for breakfast or lunch and make for a filling and tasty meal accompanies with pickle, curd (yogurt) or white butter. 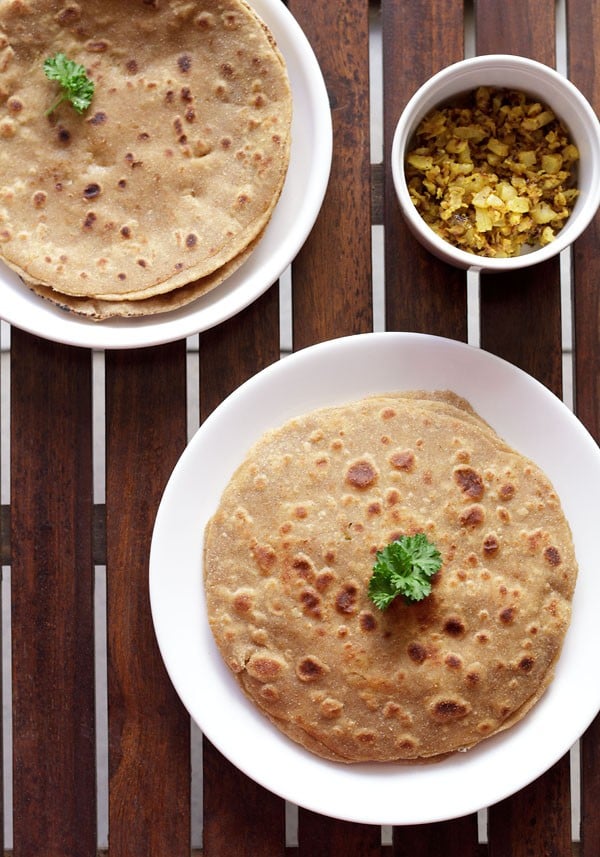 What is Mooli Paratha

Mooli paratha is another favorite paratha recipe from the land of Punjab. These delicious radish flatbread are usually served as breakfast in Punjabi homes.

Mooli is the Hindi word for radish. Paratha is an unleavened flatbread made with whole wheat flour. Since this paratha is made with savory radish stuffing, it is called mooli paratha. I share a family recipe that we have been making for ages.

There are two ways to make this paratha. Either the stuffing is encased between 2 layers of the dough. Or the stuffing is mixed with the flour and kneaded to a dough. I shared the first version which is how it is traditionally made.

As a homemaker, I only knew to make Aloo paratha before marriage. But now I can boast of making Gobhi paratha, Onion paratha, Paneer paratha and all kind of parathas.

To make this Punjabi Style Mooli ka paratha we use white radish or daikon. Ensure to use radish that is fresh and tender. If the radish roots are hard and fibrous then it will not be easy to grate them. The taste of the radish paratha made with fibrous and dense radish roots is not that great.

While making muli paratha squeeze the juice from the grated mooli. Otherwise, the paratha might break. You can also use this mooli juice to knead the dough for making paratha. Otherwise, the method to make this paratha is the same as we make any other stuffed parathas.

You can roast them with ghee (clarified butter) or oil. Just make sure to roast the paratha really well.

Usually, In Punjabi homes, mooli paratha is served with butter or curd or pickle of your choice. Since we add green chilies in the paratha so a cup of hot tea also goes well with them. They are not only delicious but also very filling.

How to make Mooli Paratha

1. Make a smooth and soft dough with 2 cups of whole wheat flour, 1 to 2 teaspoons oil or ghee, ¼ to ½ teaspoon salt, adding water as required. Let the dough rest for 20 to 30 minutes. Cover with a lid or kitchen napkin and keep it aside.

Meanwhile, rinse, peel and grate 1 medium to large size white radish and keep aside for 15 to 20 minutes and later squeeze the water from it. You can also sprinkle some salt and mix well.

Later after 15 to 20 minutes, squeeze the radish gratings. This is done so that the paratha does not break while rolling the dough. This radish juice can be used to make the dough instead of water.

TIP: Finely grate the radish or it will be difficult to roll the paratha if you use shredded or larger gratings of radish.

2. Add chopped green chilies to the grated radish. This adds a lot of spice to the paratha and goes well as usually the paratha are served with butter or curd.

3. Take two lemon sized balls from the dough and roll them into a small circle, about 5 to 6 cms on the rolling board dusted with wheat flour.

4. Take a good amount of the mooli stuffing and place it on one of the rolled dough. Don’t use too much stuffing as in that case the paratha can break while rolling. Sprinkle evenly one or two pinch of salt, red chilli powder and garam masala powder.

Also note that the stuffing should not be less as then you won’t get the taste, flavor and texture of spiced radish.

5. Cover with the other rolled round and join the edges.

6. In the meantime, heat the griddle or tava or skillet. Roll the dough into the size of paratha or roti. Care should be taken while rolling the dough as the paratha may break. we have added salt to the mooli and thus as a result some juice will start oozing out from the mooli paratha. So don’t worry about it.

Flip again a couple of times for even cooking till the paratha has got brown or black blisters and is crisp from both sides.

Make sure that the paratha edges are fried well. You can use a spatula to press the edges. Use a liberal amount of ghee or oil to fry the parathas. Well-fried muli paratha will have some brown spots and might puff up a little.

Make all parathas this way and stack them up in a roti basket if not serving immediately. Serve Punjabi Mooli Paratha hot or warm with white butter on top or with curd or with a pickle of your choice. 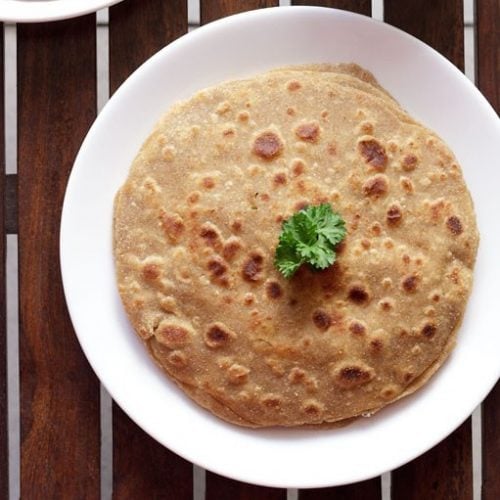 This Mooli Paratha recipe post from the archives (first published in April 2010) has been republished and updated on 16 June 2021.