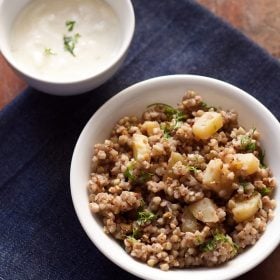 Kuttu ki khichdi or Buckwheat khichdi with step by step photos – yet another easy and quick Navratri Fasting Recipe that is nutritious, filling as well as tastes good. Made with buckwheat groats, potatoes, peanuts and spices this is a healthy dish that you can make not only for any Hindu fasting day but also regular days. 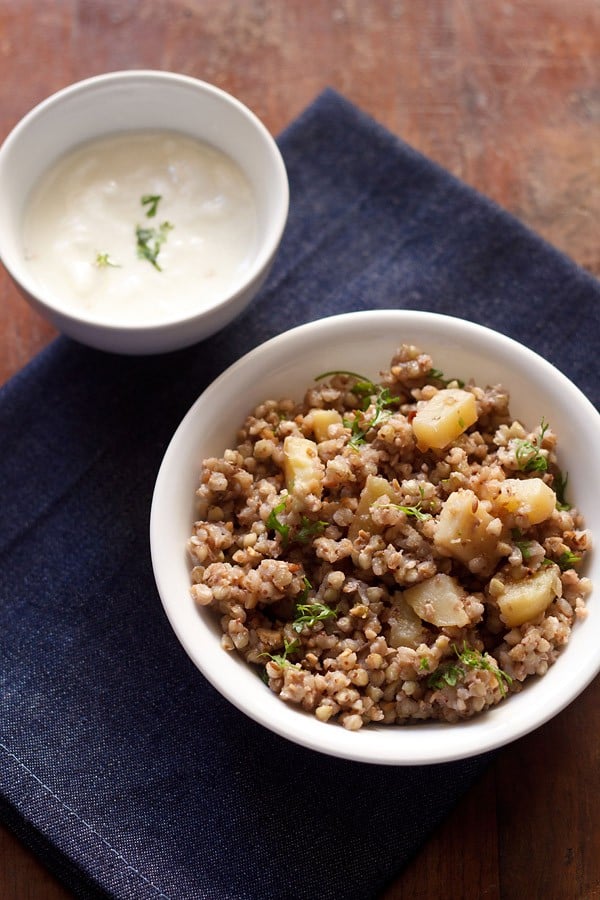 Generally we use buckwheat flour to make Kuttu ki roti or Kuttu ki poori during Navratri. This time I managed to get buckwheat groats from the organic section of a super store.

I first had buckwheat groats in Goa and was surprised to know these were available there too and that too from a local shop.

Maybe as the place where we lived were frequented by Russian and European tourists, hence due to demand these were available.

After taking an instant liking to the steamed buckwheat, I did make it a few times instead of rice and we liked its nutty flavor and taste.

When we shifted, I could not get buckwheat in the local shops and so when I spotted these groats in the super store here, I had to buy them.

Buckwheat is grown locally in India and is a super food. Buckwheat is not a cereal grain but a fruit seed. They are gluten-free as well.

Thus making them an excellent substitute for people having gluten allergy. They are rich in fibre and high in protein.

Buckwheat is also called as ‘kuttu’ in Hindi, ‘kutto’ in Gujarati and ‘papparai’ in Tamil language. Its also known as beech wheat in English.

These triangular shaped buckwheat groats have a light brown greenish color and have their outer husk removed. They are soft seeds and when you soak them in water, they become gelatinous.

The idea of making this khichdi is from Tarla Dalal which is made similar to Sabudana Khichdi. I have made my own changes to the method of preparation and the ingredients used.

For 1 cup of buckwheat I used 2 cups of water and the result was a soft and well cooked buckwheat groats.

Buckwheat is warming and so is best had in cold seasons. The warmth from the buckwheat can also be balanced by serving it with a cooling yogurt raita.

I often cook buckwheat just like rice or make this khichdi. during this Navratri, I have already made the khichdi thrice.

I served the buckwheat khichdi with a bowl of yogurt. It will also go well with Vrat ki Kadhi.

How to make Kuttu ki Khichdi

1. Measure and keep all the ingredients ready for making buckwheat khichdi.

2. In a frying pan or tawa, roast 2 tablespoon raw peanuts till they become crunchy and golden.

3. Let them cool. Remove and make a coarse powder of them in a mortar-pestle or in a coffee grinder.

4. Keep the powdered peanuts aside.

5. Pick and then rinse 1 cup of buckwheat groats few times in fresh water.

6. Drain the water and set aside.

7. Heat 1 tablespoon ghee or peanut oil in a pan or pot.

8. Add ½ teaspoon cumin seeds and fry till they crackle on low heat.

11. Add 2 medium-sized potatoes which are chopped into small cubes.

12. Stirring often saute the potatoes on medium heat. Its better to chop the potatoes in smaller cubes, so that they cook faster.

13. Saute on medium heat stirring often for 2 to 3 minutes or more till the potatoes become crisp from the edges.

14. Then add the ground peanuts.

17. Stir to combine and saute for 1 to 2 minutes on low to medium-low heat.

21. Cover the pan with its lid and simmer the buckwheat khichdi on a low to medium-low heat.

22. Cook till all the water is absorbed and the buckwheat has softened and cooked well. While the buckwheat khichdi is simmering do check a few times to see if the water has not dried.

If the water looks less and the buckwheat groats are half cooked then add some water as needed and gently stir. Cover and continue to cook the buckwheat.

26. Serve Buckwheat Khichdi hot or warm with a bowl of curd (yogurt) or with vrat ki kadhi or any fasting curry dish.

If you are looking for more Fasting recipes then do check: 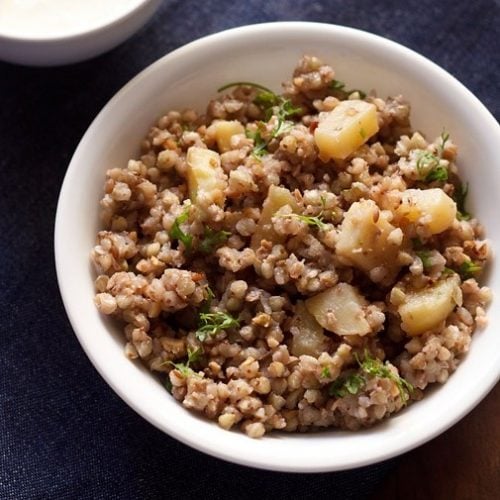 This Kuttu Khichdi post from the archives first published in April 2014 has been republished and updated on 25 June 2022.