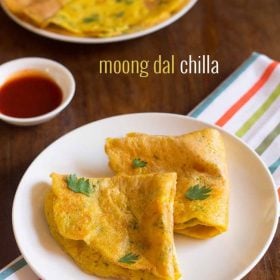 One of my most favorite dal or lentils is the moong dal, because you really can’t doubt on its versatility. Plus, it is highly nutritious, filling and is a great choice when you want to manage your weight effortlessly. According to Ayurveda, moong dal is also tridoshic, that is, balances all 3 doshas. Try this Moong Dal Chilla (or Moong Dal Cheela) – an Indian style spiced Mung Bean Pancake made with husked and split mung lentils. These savory tasty pancakes makes for a great breakfast, brunch or even a lunch when you want to have something different and healthy at the same time. 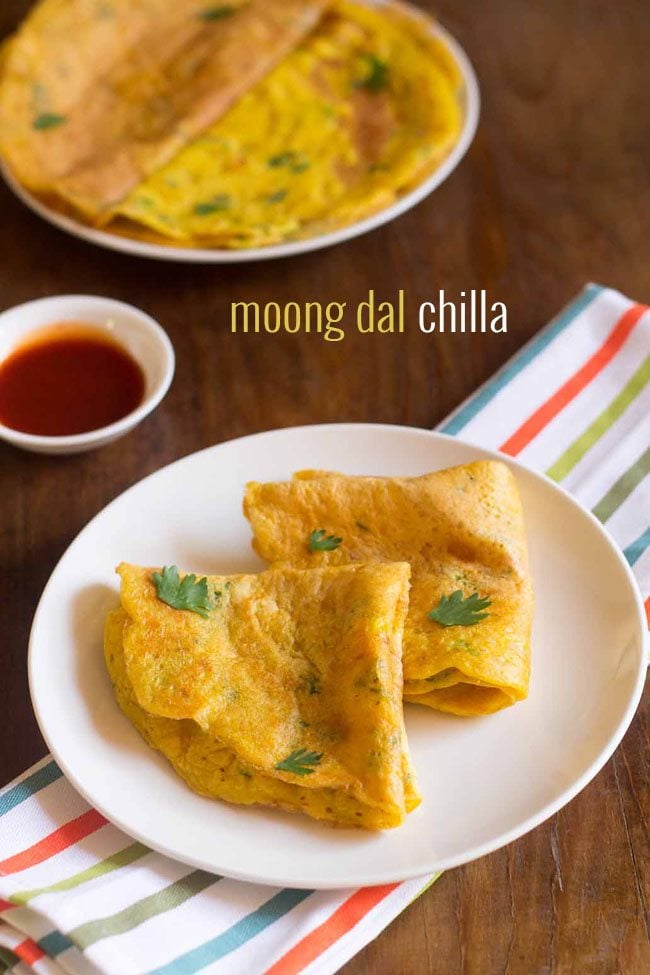 Chilla or Cheela is nothing but an Indian style pancake. Traditionally, these are popular in North India where both sweet and salty variants are available.

This Mung Bean Pancake is one such savory variation. Others in this category are made with Indian cottage cheese (paneer), semolina (rava) or the classic Besan Chilla made with gram flour. A popular sweet cheela variation is made with a whole whet flour batter and sugar/jaggery.

A cheela can be made either soft or crisp. If the batter is poured and not spread much, just like an uttapam, then what you get is a soft cheela. If the batter is spread thinly and evenly, then you get a crisp chilla.

Chilla is also known as pudla, puda or poli in various other regions in India. These versions can be found in Maharashtra and Gujarat. A close cousin of the Moong Dal Chilla is the Pesarattu Dosa of Andhra Pradesh in South India. These are more crepe like but made with moong dal batter.

You must really not underestimate the power of moong dal in terms of taste as well! This Mung Bean Pancake will prove that. It is one of those healthy dishes which is also full of flavors and simply delicious.

This chilla recipe is one of the first recipes that I learnt from my mother. She would make them often then; she still makes them often now.

Moong Dal Chilla can be made with both split and husked moong or whole moong. In this recipe, I have used yellow moong lentils. Some basic spices and herbs are also added.

Some days I prepare chilla for breakfast as well as snacks. The preferred ones at home are always this Moong Dal Cheela plus others like besan chilla, Oats Chilla and Rava Chilla.

While the chilla with besan is super quick to make, the moong dal ones require soaking of the moong lentils.

So, when you want to make these mung lentil pancakes for breakfast, soak the moong dal overnight. And if you are planning these as an evening or after school snack for kids, then soak the moong lentils for just 3 to 4 hours.

You can make the Moong Dal Chilla more wholesome by adding some grated carrot or beetroot, chopped capsicum or shredded cabbage.

Serve these Mung Bean Pancake stuffed with crumbled/grated paneer or as is with tomato ketchup or green chutney. Have these chillas for breakfast or as a snack.

How to make Moong Dal Chilla

3. The moong dal will swell or double up in size. Discard the water.

4. Add the drained moong dal and ¼ cup of water in a grinder or blender jar. Grind or blend to a fine and smooth batter.

Don’t add too much water at once, else the moong dal won’t grind very well. In case you are not able to grind the lentils, you can add 1 to 2 tablespoons more water.

9. Add the chopped ingredients to the moong dal batter.

12. Allow the batter to rest for 15 to 20 minutes. The onions will leave moisture and the consistency of the batter will change slightly.

Check the consistency of the batter. If its too thick, then add 1 to 2 tablespoons water. I added 1 tablespoon water to make it to a pouring consistency.

Adding too much water will not be good as the batter will not spread evenly on the skillet or tawa. The batter should be of a medium pouring consistency, neither too thick nor too thin.

13. Heat a well seasoned pan. This is important as the pan has to be hot before you make the cheela. Add a scoopful of batter on the center of the pan.

Tip 1: If using a cast iron pan, spread some ½ teaspoon oil evenly all over the pan or tawa before adding the batter.

Tip 2: If using a non-stick pan, there is no need to spread oil on it.

14. Rotate the batter with the back of spatula giving a round and even shape.

16. After a minute or so, they will look crisp and brown.

At this point drizzle a bit of oil at the sides and on top of the chilla. Spread the oil evenly with a spoon on the top of the cooked chilla.

17. Flip the chilla and cook the other side for a minute or till golden brown and crisp.

18. Once the chilla appears crisp and brown, fold it.

19. Again fold them forming a triangular shape or you can just keep them round. Similarly make rest of the chillas. To speed up the cooking, use two pans and make chilla on them.

20. Serve the Moong Dal Chilla hot or warm with tomato ketchup or chutney. Since these chillas stay soft, you can also pack them in a tiffin box. 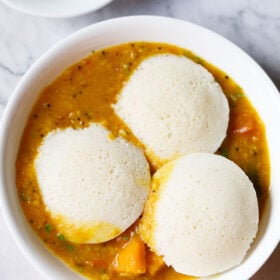 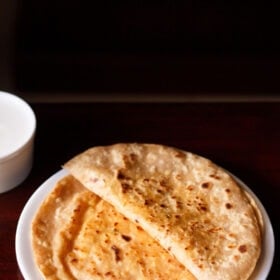 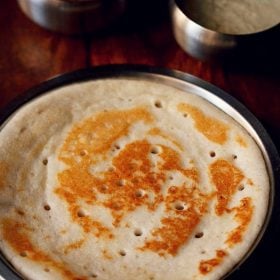 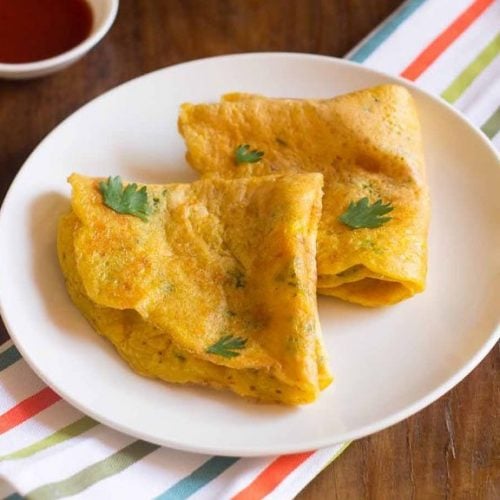 This Moong Dal Chilla recipe post from the archives first published in July 2016 has been republished and updated on 6 July 2022.