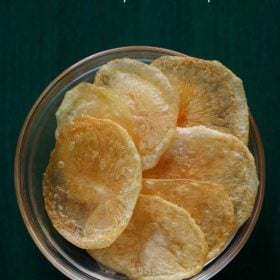 Light, crisp, and perfect for snacking, these oven baked Potato Chips (a.k.a. Potato Wafers) are a healthier alternative to the deep-fried version. This Potato Chips recipe is simple to make at home and doesn’t require any specialty equipment! 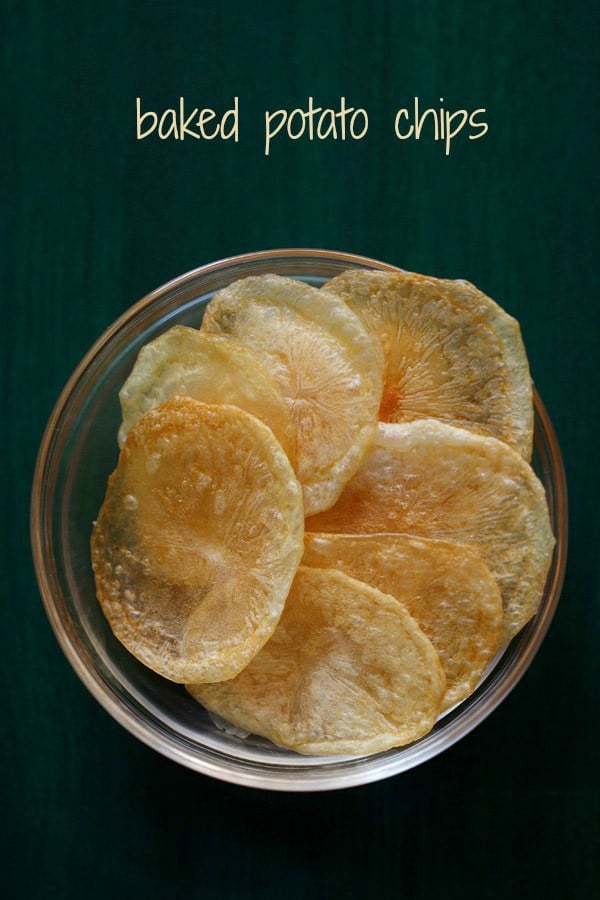 Potato chips are a favorite among many folks. The ones which we get in the market are mostly deep fried.

We also like fried potato chips, but most of the time we just want to snack on healthier, less oily stuff.

I usually make potato chips at home, both fried as well as baked. Not to say that we don’t buy ready-made chips from the market, which we do on occasion.

This recipe is a healthy alternative to regular fried potato chips. Some prep work is required, so make these once you are free from all your chores.

I also make sun-dried potato chips in a similar way, but for that recipe, no oil is added and they are dried in the sun instead of baked.

How To Make Potato Chips

2. Rinse the potatoes first. Then peel and slice potatoes using a mandoline or a slicer directly in the bowl containing water.

I used 3 large potatoes weighing 550 grams, or about 20 ounces. It is far easier to use a mandoline or a slicer for slicing the potatoes because the slices have to be thin.

Don’t slice with a knife as thick slices do not become crisp when baked, but they still taste good.

3. Slice all the potatoes and immerse them in the water. They should remain immersed in the salted water.

5. Drain all the water from the bowl and carefully add the potatoes to the boiling water.

6. Blanch the potatoes for 3 to 4 minutes on high heat.

7. Switch off the heat, cover the pot, and allow the potatoes to stay immersed in water for 3 to 4 minutes.

8. The potatoes should be translucent after the blanching process is over.

9. Drain all of the water from the potatoes well using a colander or strainer.

11. Add 1 tablespoon of oil and ½ teaspoon of salt, or add as required.

12. Gently mix very well so that the oil coats the potato slices evenly. You can add up to 2 tablespoons of oil in total.

13. Place the chips in a lightly oiled baking tray keeping ½ cm space in between the slices.

Bake potato chips in a preheated oven at 250 degrees Celsius/480 degrees Fahrenheit for 10 to 15 minutes. Do keep a check as oven temperatures vary.

I baked in batches since I have a small oven. If baking in batches, there is no need to brush oil on the baking tray again.

High temperatures work best, as when I have baked these at lower temperatures, they did not have the light crisp texture.

14. Once they look crisp and are light golden to golden, then remove potato chips from the oven.

As soon as they are cooled, store the potato wafers in an air-tight jar or box. They get cooled within a minute. You can make them more golden if you want.

Serve these crisp, thin, and light baked potato chips as a snack or an accompaniment to your favorite dips, sandwiches, or wraps.

Feel free to sprinkle more salt as needed on the baked potato wafers.

Let me preface this by saying that “healthy” is a complex, loaded term that means many things to many people. With that said, oven-baked potato chips are without a doubt healthier than fried potato chips.

Why did my baked chips not come out crispy?

Uh-oh, it sounds like your oven wasn’t quite hot enough. I suggest you invest in an oven thermometer to make sure the temperature you set it to is the temperature it actually ends up cooking at. 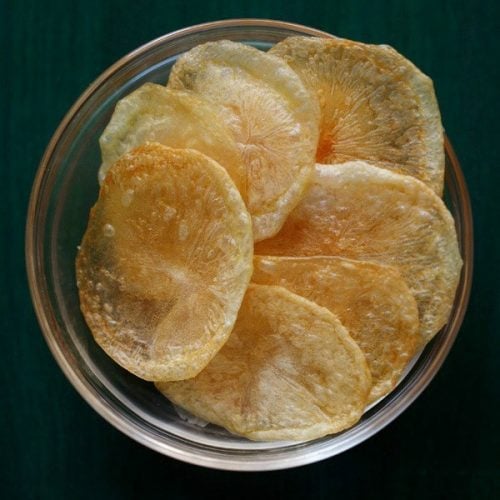 This Potato Chips recipe from the archives, originally published in April 2015 has been updated and republished on January 2023.