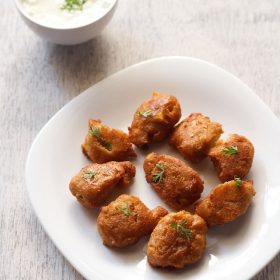 Kaddu pakoras recipe – pumpkin fritters made for Navratri fasting. this is the third kaddu recipe I am posting for Navratri. The other two recipes were Kaddu ka halwa and Khatta meetha kaddu. 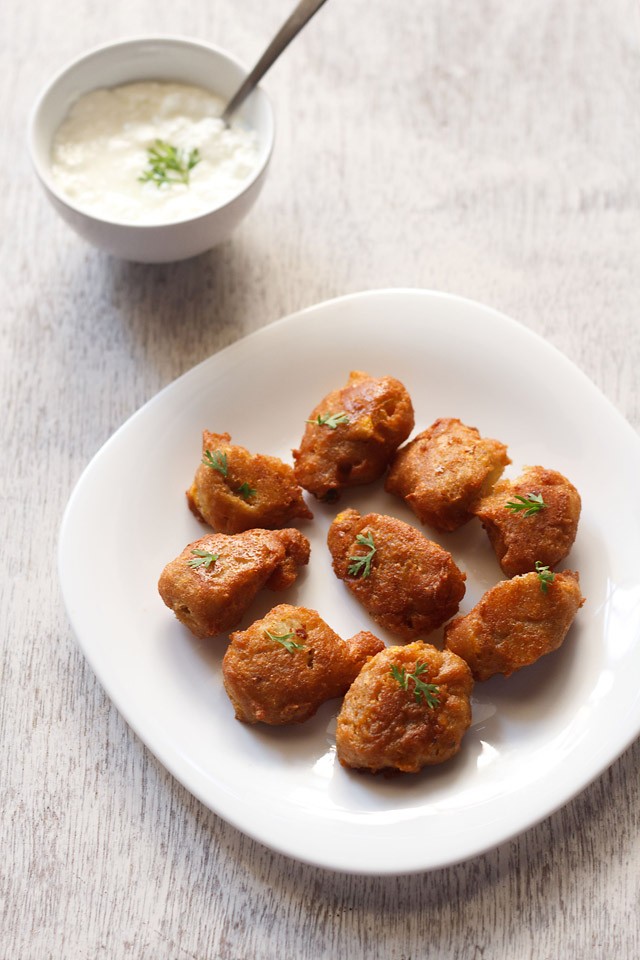 All these three recipes were made from one medium sized pumpkin or kaddu. After making halwa and kaddu sabzi, a small portion of kaddu was still left, so I though to better utilize it in making these soft and yummy pakoras. This recipe has been adapted from nita mehta’s small cookbook.

I often make fried snacks and in the blog, you will find fritters or pakoras made from almost all veggies like aloo, onion, cabbage, palak and so on… These kaddu pakora are latest addition to this list of 40 pakoda recipes in the blog.

The most difficult part in making any kaddu dish for me is to peel it or to cut it into small pieces…. Unless you buy pre chopped pumpkin pieces from the market. Once you are able to chop the pumpkin, then more than half of the job is done.

From a difficult veggie to chop, the pumpkin transforms into a melt in the mouth veggie when cooked. Other veggie which comes in my mind with the same melt in the mouth quality is sweet potato. These kaddu pakora are very soft from inside and are a tasty snack to have during Navratri fasting.

Other snacks you can make for Navratri fasting are:

You can Serve these kaddu pakora with yogurt which has been sweetened with sugar. 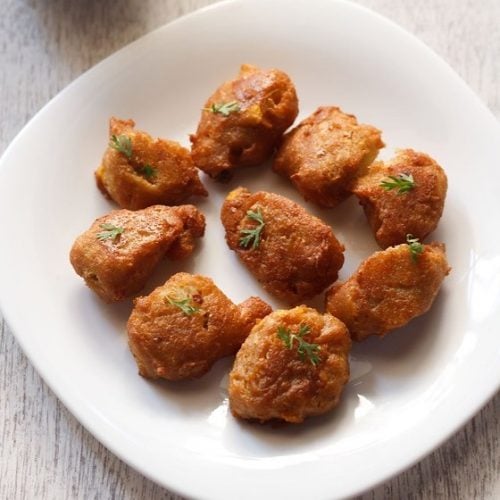 How to make kaddu pakora or pumpkin fritters

1. Chop kaddu or pumpkin finely as shown in the pic below. Also mash the boiled potatoes. Take both of them in a mixing bowl. 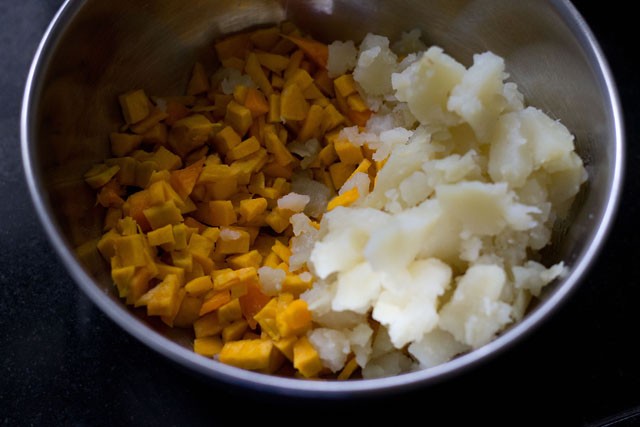 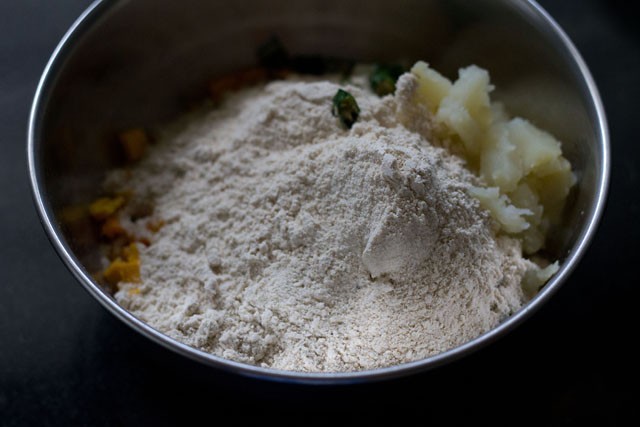 3: add water as required and make a thick batter for making pakoras. Season with some cumin powder and black pepper powder. 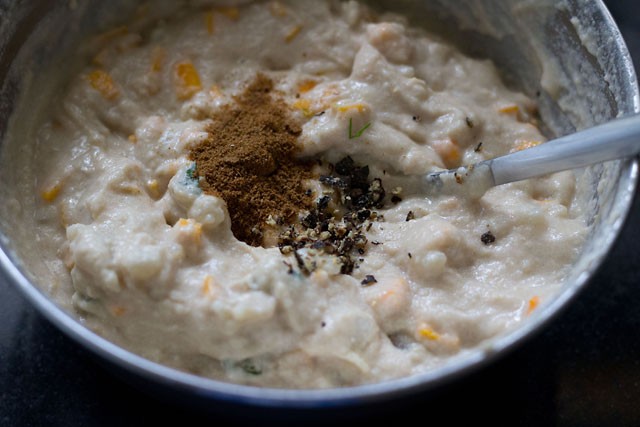 4. in a non-stick kadai or pan, heat oil. When the oil is sufficiently hot then drop spoonful of the batter and fry the kaddu pakora till they become crisp and golden. Drain kaddu pakora on paper napkins to remove excess oil. 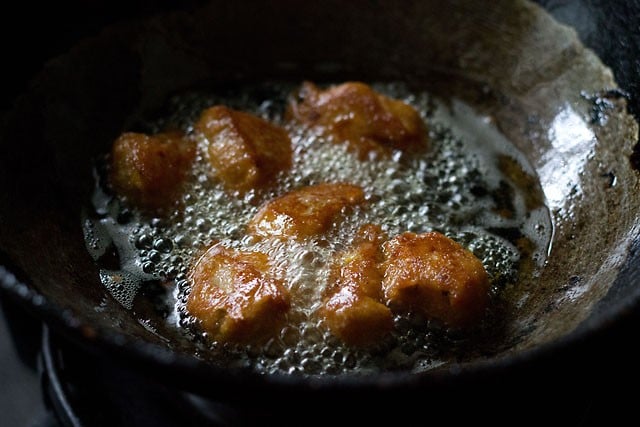 5. Serve kaddu pakora with yogurt which has been sweetened with sugar. 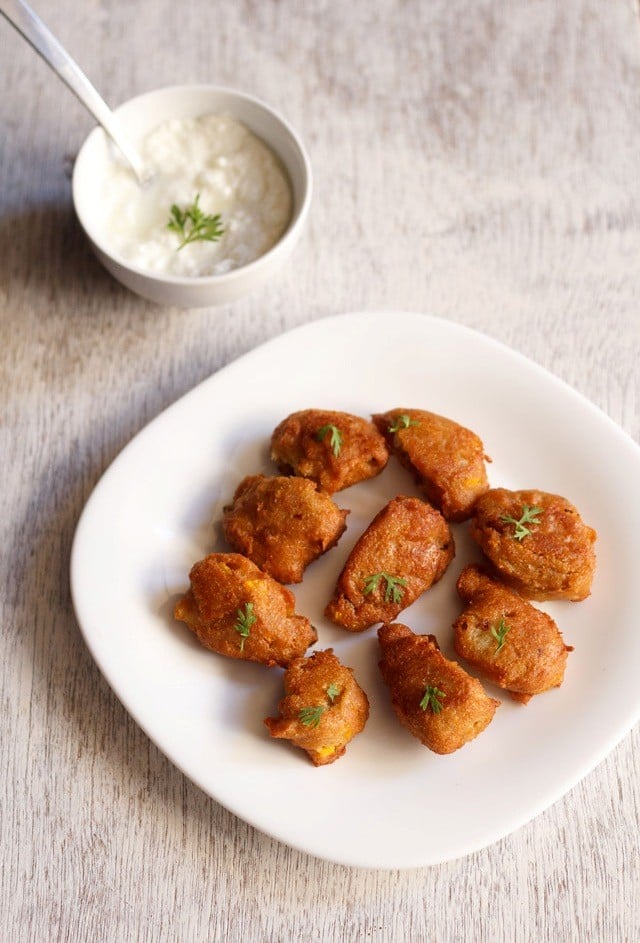